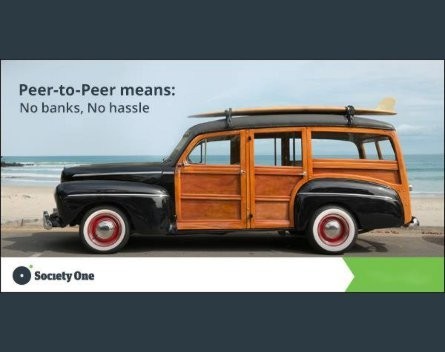 According to a report in the AFR, the full investment in SocietyOne was $8.5 million, comprised of Rocket Internet, a Berlin-based incubator, and several local investors including the Australian head of global equity group KKR, Justin Reizes, who invested in a personal capacity.

The investment is believed to be the first equity stake a bank has taken in P2P anywhere in the world.

Reinventure Group cofounder Simon Cant says they have been inundated with inquiries since the fund was announced, and that this was their first investment based on the fact that it met with all their key criteria.

“There are four specific requirements that we look for in a company and we’re going through a lot of applications from interested parties at the moment,” Cant says.

1. That the entrepreneurs are experienced.

Cant says that both Society One founders Matt Symons and Greg Symons (not related) have considerable experience and had been involved in a number of startups, both building and exiting them.

According to Matt’s LinkedIn profile, before returning Sydney he was the CEO of Memetrics Ltd a profitable, rapid growth data and analytics technology business based in San Francisco.

Meanwhile, Greg has experience in the financial technology space and has been an entrepreneur since he was 15.

2. The business is based on an emerging trend

Cant says that peer-to-peer lending has emerged as a trend in the US and Europe and it was likely to do the same here.

In the UK, the first peer-to-peer lending platforms were launched as early as 2005, with the earliest Zopa, having issued loans in the amount of 400 million GBP and is currently the largest UK peer-to-peer lender with over 500,000 customers

Cant admits there is still a lot of user education around peer-to-peer lending in Australia, but that it will emerge as a big trend in the next year. He says the possible IPO of The Lending Club would create considerable interest in the area.

3. That the startup is inherently regional

Cant says the other factor they are looking for is that startups they invest in have a regional focus and can grow in one market before moving on to another.

“The thing with banking is that because of every market’s regulations the startups we focus on tend to have to be regional,” he says. “We’re not looking for global plays like Google or Twitter.”

4. That partnerships with Westpac can bring significant advantage to the business

“The obvious thing we need to bring to the table, through Westpac, is the ability to help the businesses we invest in through our partnership,” Cant says.

Although the fund has separate management and operates at an “arm’s length” from Westpac, Cant says a lot of time is spent developing relationships between the bank and the startups they invest in.

SocietyOne has emerged as the first fully compliant peer-to-peer lender in Australia. Since its founding in August 2012, the company has issued loans for over $US1.2 million and received praise for its innovative mobile phone technology that speeds up loan application and funding.