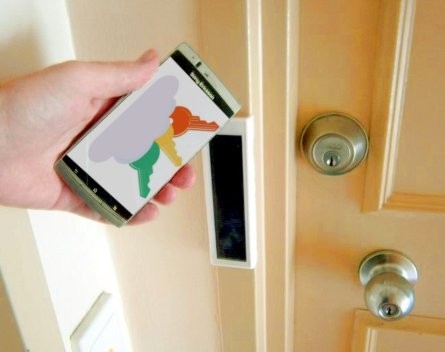 LEAPIN Digital Keys, a start-up that’s been experimenting and pursuing a code-based lock and security system for a couple of years, is currently taking part in the 10X Accelerator in Ohio in the US.

The Gold Coast-based start-up will join one Israeli start-up and eight American companies for a 10-week program.

Founded by Steve Dunn and Stan Faulkner in 2008, the start-up is seeking to license a code-based approach to replace magnetic swipe cards and code keys, focusing on accommodation and the increasing demand for more flexible security options from the sharing economy such as co-working spaces and AirBnB.

Dunn told StartupSmart they were finally beginning to get commercial traction as a series of similar start-ups from around the world venture into the space.

“It’s been two-and-a-half years full time, and we’re finally getting some traction now,” Dunn says. “We’ve seen the market validated in the last six months, so we were a bit ahead of the waves, which are finally breaking as we’re seeing success in the United States by similar groups.”

LEAPIN Digital Keys plan to license their technology to a range of lock providers, and are in the final stages of negotiations with a significant German lock manufacturer.

Dunn says creating a new technology start-up is easier in the US.

“We’ve been learning a lot from the attitudes, rapport and encouragement from the Americans,” Dunn says. “One thing I’ve noticed in Australia is that we have the tall poppy syndrome but also the wait and see approach to innovation. We want to see it take off overseas before backing it. But here (US), it’s a go and do it, go and get behind it and make it happen. They jump in when they see something good.”

“The biggest thing we got out of the Innovyz program was the connections. One of our now advisors is the VP of a major lock manufacturer and distributor, and he single-handedly opened up all of our potential licensing deals,” Dunn says.

More than 25 companies have graduated from the program and have gone on to collectively raise over $9.4 million in funding.

“We’re looking to raise capital too, and we struggled in Australia. There were a few reasons, but the main confusion was we’ve got a software patent and program, but we’ve got a product, but most investors are looking for software or hardware,” Dunn says.