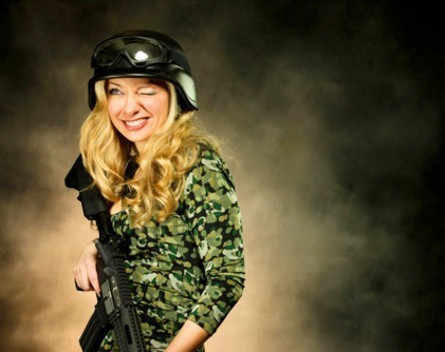 US-based artist and libertarian Tatiana Moroz created her own digital currency, Tatiana Coin, as a means of funding her work.

Moroz is well known in the bitcoin community as the musician who produced the bitcoin jingle.

“When we made Tatiana Coin, what we were aiming to do was an Indiegogo thing, but kind of on steroids,” Moroz told the audience at the Bitcoin Melbourne meetup on Monday night.

Moroz says what she finds particularly appealing about Tatiana Coin is the increased level of engagement with her fans.

“So you have Indiegogo, which is OK, but you have a campaign and you say give me 20 bucks and you’ll get a t-shirt, but you never wear it, it’s ugly and that’s the end of our relationship,” she says.

“(Tatiana Coin) is a really cool thing because people didn’t just donate something and forget about me,” she says.

Moroz was speaking and performing at a Bitcoin Melbourne meetup with bitcoin expert Andreas Antonoupolos and smart contract lawyer Pamela Morgan. She came up with the idea shortly after performing the Bitcoin Jingle at the Inside Bitcoins conference in Berlin.

Initially the coin was based on an auction model. Each day a certain amount of Tatiana Coin would be auctioned off, with prices depending upon activity on the site. However, Moroz soon decided to pivot away to a fixed model. She says while her core fan base of libertarians are a great target market for bitcoin, many didn’t own and weren’t familiar enough with digital currency.

“It was too hard to explain and it was too new, so now we’ve changed it over and now it’s a fixed model, [a Tatiana Coin is worth] about five cents or something,” she says.

As for whether or not digital currency is the answer to funding woes for small independent artists and musicians, Moroz says it’s too early to tell.

“We’re trying to figure it out,” she says.

“I think by opening up the conversation and by getting those questions out there and identifying problems… what we’re doing is creating opportunities for entrepreneurs to solve those problems.

“The benefit of a coin to a label or a larger artist is that I’m locking people into that relationship. As artists, you don’t need millions of dollars; you just need enough money to go into the studio, and enough money for some people to find out about you.”