Melbourne startup to sell stain-repellent chef jackets – no, it’s not a load of crockenbush 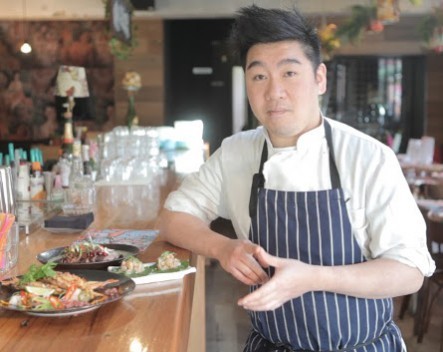 A Melbourne startup is using patented nanotechnology to create chef jackets and aprons that repel liquids and stains.

Fabricor Workwear has launched a Kickstarter campaign to help fund its venture. Co-founder Adrian Li – who has been previously appeared as a mentor on MasterChef Australia – told StartupSmart the startup hopes to save those who work in the hospitality industry both time and money. He points out his chef jackets get ridiculously dirty and he often gets home at 1am.

“It’s a nightmare for all chefs to get their whites constantly cleaned,” he says. “The sauces we use are pretty devastating to white clothes. We use white jackets because they’re old-school and professional – but even if you wear black jackets they still get stains.”

The $5000 target Li is looking for is small in comparison to the amount other startups ask for in order to get off the ground. However, the money will be used to fill the first minimum order for the company’s manufacturer. As well as drumming up publicity, the crowdfunding campaign will allow Fabricor Workwear to fulfil specific orders and test the demand for the product.

Li says it took a long time to find the right manufacturer. His advice for other startups is to slow down and be patient.

“Don’t rush anything – weigh up all your options,” he says. “Make sure it’s the right choice and nothing better will come along. We spent ages looking around, asking people, going back and forth, being really annoying.”

Fabricor Workwear is the first entrepreneurial venture Li has been involved in. His advice to people who think they can solve an everyday problem in their workplace by using technology is to “just go for it”.

Water-repellent technology has been available for some time, but only recently has it been used for commercial use. In July, Australian startup Threadsmiths unveiled a T-shirt that does not get wet. According to Fabricor Workwear, the difference between it and other companies is that it is strictly for work apparel. Eventually the startup hopes to branch out into nurse uniforms, lab coats and medical uniforms.

“We just want to get chefs onto it and maybe work on the technology and make it cheaper,” Li says. “With this treated material they [the chef jackets] are more expensive than the linen white jackets, but you’ll save money regardless.”