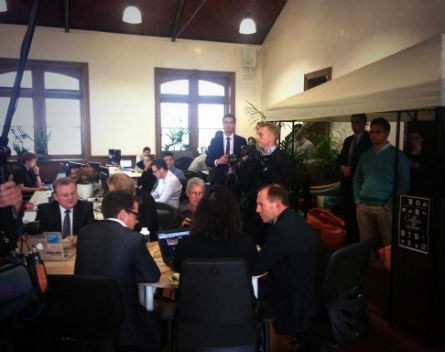 Startup figures got the chance to lobby Prime Minister Tony Abbott to encourage superannuation funds to invest in venture capital, as well as open up equity-based crowdfunding, when he visited The Hub co-working space in Melbourne on Wednesday.

While at The Hub, Abbott officially announced reforms to employee share option schemes and met with startups HealthKit and School of Life.

Hub Australia founder and chief executive officer Brad Krauskopf was granted an audience with Abbott and Minister for Small Business Brice Billson, along with representatives from the venture capital industry, Startup Grind, Silicon Beach, That Startup Show, AngelCube, and the Founders Institute.

During the meeting, the group congratulated Abbott and Billson on the changes to employee share option schemes that have been implemented as part of the government’s Industry Innovation and Competiveness Agenda. They also lobbied the government for more support.

“How do we make it so that it’s easier for super funds to invest in venture capital? How can we get (equity-based) crowdfunding going as well,” Krauskopf says of the group’s concerns.

“All these things are known issues. So in that sense it wasn’t new stuff, but we got the opportunity to communicate it.”

Krauskopf says changes to employee share option schemes are an important first step from the government to support startups.

Pollenizer chief operating officer Clare Hallam explains how the system currently works, illustrating why the changes are so important.

“For a startup that has raised some angel money and now has a valuation of $1 million, it’s a challenge to motivate a new employee with equity. If you issue the shares the employee has to pay for them, you can give a payment summary for the value of the shares, but the employee will have to pay the tax at the point of issue. Not very attractive to the employee to pay tax on something that may never reach its proposed value,” she says.

Australian Private Equity and Venture Capital Association chief executive Yasser el-Ansary is thrilled such a problem will no longer exist when the proposed changes are implemented next year. However, he adds while it’s a step in the right direction, more work needs to be done if Australia is to catch up to other developed countries and compete globally in key growth innovation over the long term.

“Part of that will be ensuring that innovative businesses have access to venture funding at all stages of growth and that Australia improves its ability to translate and commercialise basic research into real products and outcomes,” he says.

“We will be continuing to advocate for more policy changes to encourage greater private sector investment into this critically important part of the economy.”

The government’s commitment to invest $12 million in improving the focus of science, technology, engineering and mathematics (STEM) subjects in primary and secondary schools was also announced as part of the agenda. That $12 million includes $3.5 million that will go towards providing greater exposure to computer coding in schools.

“We must recognise basic coding as a foundation skill and build it into the national curriculum,” he says.

“This needs to start at a young age, so that our students are better prepared and equipped to compete globally, as other countries such as the UK have these programs in place.

“A focus on technology for students in schools means we need better professional development for teachers in the technology space.

“ICT is uniquely dynamic – and will remain that way for the foreseeable future. Many of today’s young people will work in jobs nobody has even heard of today. This requires a lifelong approach to skills and education in the technology area.”