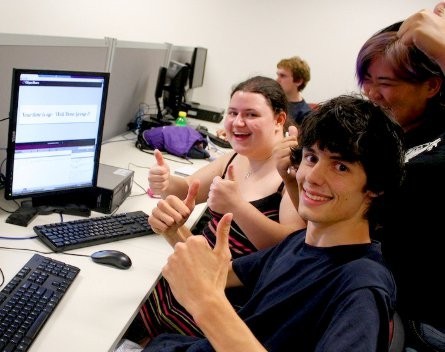 The National Computer Science School has encouraged entrepreneurs and “technology creators” to sign a petition supporting the introduction of computer-programming in Australian schools.

NCSS provides opportunities for Australian high school students to learn computer-programming skills with the hope of attracting them to ICT-related subjects at university.

The draft draws together the subjects of design and technologies, and digital technologies. It is written on the assumption that all students from Foundation to Year 8 will study both subjects.

For Years 9 to 10, school authorities will decide whether students can choose to continue in one or both students and/or whether technologies specialisations not provided for in these subjects will be offered.

According to NCSS, the digital technologies section of the draft is a “massive step in the right direction”.

“If enacted, it will equip Australian students with the skills they need; not just to become competent consumers of technology, but to design and create,” NCSS wrote in its petition.

“Computer science skills and concepts will be introduced earlier in schools.

“Every Australian student will learn to design and implement simple visual programs in Year 3-4, and learn a general purpose programming language in Year 7-8.”

Earlier this year, the Australian Computer Society released its Australian ICT Statistical Compendium for 2011, which revealed university ICT annual enrolments are less than half the number of a decade ago.

Boosting the number of computer science graduates is one of the top priorities of #startupAUS, which is working on a national campaign to accelerate the growth of tech start-ups.

“Local graduates in computer science have shrunk significantly over the last decade and we all agreed that it’s a national imperative to fix this,” a #startupAUS spokesperson said last month.

“On a practical level, this means giving more high school students the opportunity to learn computer science at an earlier age and that teachers are supported.”

Similarly, Posse founder Rebekah Campbell believes there needs to be a bigger emphasis on computer programming in school, particularly for female students.

“When I was at school all the smart kids studied French, History and Latin, so that’s what I took,” Campbell told StartupSmart in March.

“I would have loved to learn more about computers but I went to a girls’ school and it wasn’t really an option so I never thought about it as a career. I wish I could write code.”

According to NCSS, students should learn to use and develop technology to solve real-world problems, and be encouraged to think entrepreneurially.

The draft was open for public consultation from February 19 to May 10. It will now be revised, and a second draft will be available for public viewing from September while the curriculum is finalised for ACARA board approval.

Subject to ministerial approval, the final Technologies curriculum will be published on the Australian Curriculum website in late 2013.