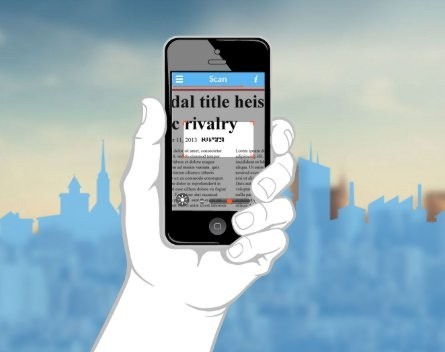 Like QR codes, Shomi codes link to digital content. However, as Shomi codes are based on font they’re smaller and more flexible than their counterpart, and they don’t need to be black and white.

Founder Tony Williams says it’s designed specifically for being placed into a line of text or other confined spaces in publishing.

“The advantage, because it’s a font, it’s a lot quicker and easier to implement than a QR code,’’ he says.

“QR codes were designed as a high density alternative to a barcode for tracking automotive parts. They are completely over engineered for use as mobile linking technology.”

Microsoft briefly flirted with a QR code competitor called Microsoft tag, although it decided last year it would be terminating that service in 2015.

“Fundamentally, they did not address one of the main problems with the QR code, which is its format, what Microsoft did was make a code that was even more data dense, typical engineer’s approach,’’ Williams says.

“You just do not need all that data for a mobile link.”

Shomi plans on making money by storing the data it gathers from Shomi code users and providing analysis of that data for publishers using the code.

“Basically, the free version of the platform is available at the moment, along with basic analytics,’’ Williams says.

“We can control the experience and we capture all that data, that’s one of the big advantages.

“If companies are using it to direct their reader, they want to learn what they can about who’s on the other end.

“Where we’ll make our money is with packages of detailed analytics and then we’ll charge on a tiered scale based on scan usage.”

Williams says the Shomi team is in the process of looking for seed funding.

“At the moment it’s getting as much traction with the platform as we can,’’ he says.

The company is on the lookout for businesses that could become potential early adopters of Shomi code.

“We have a Publish Partners program running at the moment so that we can find some early adopters in a variety of industries that we can work closely together with and we are offering them some extra incentives like first access to products,’’ he says.