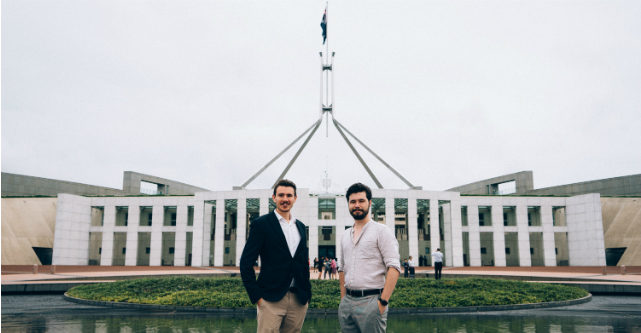 A Sydney blockchain startup has created its own political party to run in the upcoming federal election on the back of $270,000 in seed funding.

The Flux Party is on a mission to transform democracy and bring the power back to the people, co-founder Max Kaye says, with the company offering an app allowing users to directly vote on every piece of legislation that goes before the Senate.

“We want to make it clear from the beginning that we’re not in this for any kind of short-term gain, we’re here for the long run,” Kaye tells StartupSmart.

“We’re trying to provide democracy as a service – no-one’s ever done that. We’re all about developing a platform where people can have a real contribution.

“This has interplanetary potential.”

Power to the people

Flux’s app is built on blockchain technology and Kaye says that voting on legislation, trade votes or becoming advocates is as easy as booking an Uber ride. And if a user has no interest in a particular legislation, they can give up the vote to a community leader, academic or family member.

“The idea behind that is to encourage people to specialise,” he says.

The Flux Party has 13 candidates running for Senate seats in every state and the ACT, and has no election promises or policy positions.

Instead, if a candidate is elected, the Flux Party members will use the app to vote on every issue that the senator encounters.

Kaye says he hopes this new form of representation can help shift the growing apathy among voters who may feel like their voices are being ignored by politicians.

“When people do get fired up about an issue, someone can say there’s the platform to try to make a difference,” he says.

“We let people reorganise power among themselves.”

Although holding out hopes of winning seats this election, Kaye says it’s very much a trial campaign.

“We’re still hoping to win a seat this election but our priorities will be building from the ground up,” he says

In the six months since its launch the Flux Party has attracted nearly 3000 registered members.

Despite being backed by a privately owned startup, Kaye says the party is committed to transparency.

“The app is going to be open source so it’s open to scrutiny” he says.

“It will become very quickly evident whether the process is working or not.”

Flux Party is also planning to run in local council elections later this year to further trial the process, he says.

“You could literally sneeze and get in,” Kaye says.

“Taking on low-risk elections in that way, we hope to open the platform to a wide user base as fast as possible.”