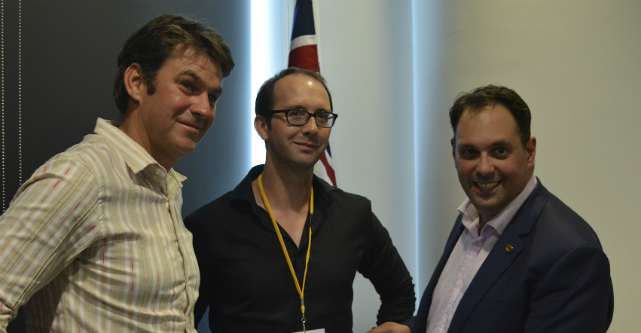 A Melbourne fintech startup hoping to change the way SMEs do business has launched with a handshake from the Victorian government.

Speaking at the launch, Dalidakis said it was great to see innovative Victorian startups like Dragon Bill working to make things better for small businesses, especially given the real problem of late payments.
The startup wants to improve the experience for people at both ends of service provision: customers and providers, Hally says.

“Dragon Bill is a payment tool for small business service providers to help them get paid on time and to make sure customers get what they paid for,” Hally tells StartupSmart.

The escrow service shifts control of payments to an independent, licensed third party to protect bother buyers and sellers.

Hally says they developed the concept through working with Pay Pal’s compliance team and the Startup Blueprint program.

“They said we’re the first people doing something like this,” he says.

Hally says the average small business has over $10,000 in outstanding invoices and loses more than 80 hours a year chasing this.

On the other side, he says nearly 60% of customers still pay for a job even when they’re unhappy with it.

“We’re trying to change the way transactions are done in small business,” he says.

Nearly two years in the making, Hally says one of the key challenges in getting Dragon Bill to where it is today was navigating through the complex regulatory and legislative fintech space.

“I have a technical background, not finance,” he says.

Hally is a web developer with a career in tech and engineering spanning more than two decades.

“It’s the first time I’ve gotten this far with a startup,” he says.

To overcome this knowledge gap, Hally says networking and connecting with people in the local fintech scene was critical.

With basic regulatory hurdles like the Australian financial services licence costing anywhere between $20,000 to $70,000, Hally says it’s incredibly important for founders of fintech companies to link with experts in the finance sector before investing significant time and money in new ventures.

This year, Hally hopes to raise as much as $1 million to help them make key hires in marketing, development and financial advice to achieve scale.

He says their main goal for 2016 is to gain 300 customers so they can make Dragon Bill their full-time focus, but more would be even better.

“A thousand customers at the end of the year could give us revenue of $2 million,” Hally says.