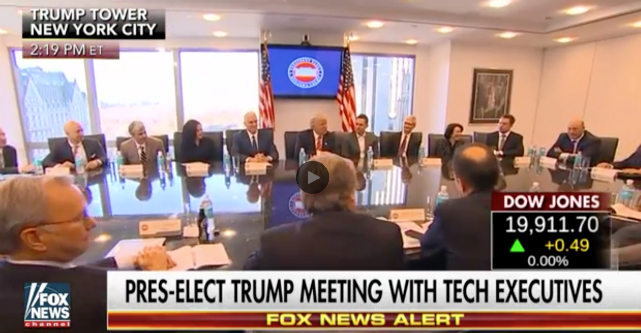 “My administration is going to work together with the private sector to improve the business climate and make it attractive for firms to create new jobs across the United States from Silicon Valley to the heartland,” said Trump.

At the Trump Tower

During the tech round-table, Trump noted that the “monster companies” in the room had beaten many others to make it here.

“I wont tell you the hundreds of calls we’ve had asking to come to this meeting,” he said.

Around the table at Trump Tower’s tech meeting was Amazon founder Jeff Bezos, who started the hashtag “#sendDonaldtospace” after his publication Washington Post, which he bought in 2013, was banned from Donald Trump’s election campaign events for negative coverage.

“I’m here to help you folks do well and you’re doing well right now and I’m very honoured by the bounce,” said Trump at the meeting, in response to stock markets making a slight come back after his election win initially sent shockwaves through some markets.

“So right now everybody in this room has to like me at least a little bit and we’re going to have that bounce continue,” said Trump.

This is believed to be due to a fall-out with Twitter chief executive Jack Dorsey and the Trump campaign.

In a blog post on Medium, written by Trump’s presidential campaign director of digital advertising Gary Covy, Dorsey is condemned for refusing to oblige to an “upfront deal” that included the creation of a custom “Crooked Hillary” emoji.

In the released video footage from the meeting, Trump doesn’t share any specific ideas on innovation and technology but vows to make trade easier by keeping his door open.

“Even more importantly, we want you to keep going with the incredible innovation, there’s nobody like you in the world,” said Trump to the prominent tech entrepreneurs.

“You call my people, you call me, it makes no difference, there’s no formal chain of command around here.”

However, some commentators have noted that innovation did not appear to be high on Trump’s agenda during the election campaign.

“During his 75-minute acceptance speech at the Republican National Convention, Trump never uttered the words ‘innovation’,  ‘technology’, ‘science’ or ‘internet’,” Wired points out.

US startups at odds with Trump

In the lead up to election day, while some tech giants like PayPal and IBM showed support for Trump, he has failed to win over other parts of the tech and startup sector.

At the 2016 Dreamforce conference in San Francisco where U2 performed, band front-man Bono ripped into Trump on stage while Saleforce’s chief executive Marc Benioff dropped hints of his preferred president being Hillary Clinton.

Read more: Salesforce CEO Marc Benioff on the future of tech and the importance of giving back

Among the group were current and former executives from Facebook, including its co-founder Dustin Moskovitz and its vice president of product design Margaret Stewart.

In the letter, the group says:

“We believe that America’s diversity is our strength. Great ideas come from all parts of society, and we should champion that broad-based creative potential … Donald Trump proposes “shutting down” parts of the Internet as a security strategy — demonstrating both poor judgment and ignorance about how technology works … We embrace an optimistic vision for a more inclusive country, where American innovation continues to fuel opportunity, prosperity and leadership.”