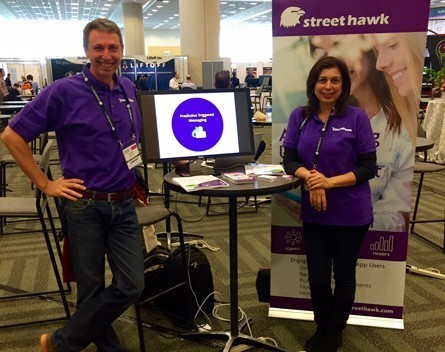 The service, which allows users to track viral engagement of applications and identifies ways to improve growth, was founded by David Jones and Linda Fernandez.

They’ll now be based in San Francisco as they take part in the 500 Startups four-month accelerator program, which has a portfolio of over 1000 companies from more than 50 countries.

The team will also get access to a range of mentors and potential investors that are involved with the program.

Jones says the access to these networks is more exciting than the funding.

“It’s not about the money, it’s about the depth of the network that’s there,” he says.

“There’s such a rich array of mentors and investors in that community. It’s an incredible network.”

StreetHawk is one of 35 startups to be participating in 500 Startups’ 14th batch.

Jones says its focus on distribution is what made the program particularly appealing for StreetHawk.

“The difference between (Y Combinator) and 500 Startups is that there’s a very strong distribution and growth aspect to 500,” he says.

“You meet with an entrepreneur in residence and distribution team once a week, and that’s almost like having a personal trainer. They keep you honest with what you’re committed to doing.”

Alumni from the 500 Startups accelerator include Punchd, which was acquired by Google, 9GAG, Chalkable and TouristEye.

Along with the accelerator funding, Jones says they’ll also be looking to close a further funding round in the next five or so months, culminating with a demo day at the end of the program.

Although originally planning to move into Asia, StreetHawk has instead pivoted to the US, and hopes the accelerator program will help with this expansion.

“We explored a hypothesis last year with Southeast Asia and it really didn’t work for us,” Jones says.

“We’ve been focusing on the US since May, and that’s put us in touch with companies that are much more agile and ready.”