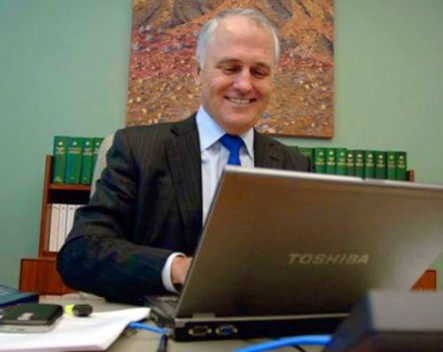 Malcolm Turnbull was hailed a hero of the startup community this week after wading into the discussions around the shortage of available venture capital for startups.

Unfortunately, he seems to be less enthused about the policy within his own portfolio that would empower tech startups all across the nation: the national broadband network.

Small business owner Julia Keady tweeted concerns about internet access from her new home in Ocean Grove, Victoria, to the Minister for Communications and the NBN, who’s response caught the attention of a few.

@SaysJuliaKeady just curious:- if connectivity was so vital to you why did you buy a house where there was no broadband available?

Keady explained that her family wanted to live in regional Australia and as a small business owner, access to the internet was critical, a point Turnbull picked up on.

@SaysJuliaKeady no I am simply asking whether given the importance of bband to you, you checked availability before buying yr new house.

@SaysJuliaKeady no – just asking you a simple question which you refuse to answer.

Luckily for tech startups, Mr Turnbull is aware finishing the NBN is his job.

The Twitter conversation, including comments from a range of people, can be viewed here.

Many in the startup community argue equipping Australia with high quality or even just adequately fast internet access would boost the ecosystem’s productivity considerably.

In September last year, Silicon Valley-based investor Bill Tai, who has backed local startups such as Canva and Shoes of Prey, told BRW the NBN was needed to help Australian startups.

“If your government would go forward with National Broadband Network (NBN) that would be great initiative for start-ups to build on,” Tai said. “It’s very controversial but if you have bandwidth – a lot of bandwidth at a low cost- things happen. Energy will flow to create more startups.”