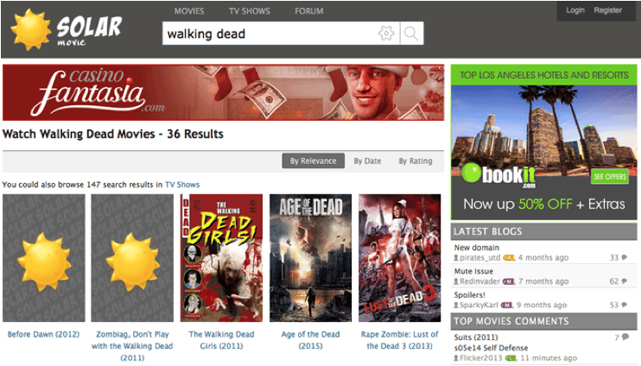 Unbowed by the defeat of Voltage Pictures to prosecute illegal movie downloaders, Graham Burke, co-CEO of Village Roadshow Limited, is spearheading a Federal Court action to block Solarmovie.ph, a pirate TV and movie streaming site. They will be the first to take advantage to changes brought in by the Copyright Amendment (Online Infringement) Bill 2015 which allows for courts to order ISPs to block access to sites that are infringing copyright.

How this will be achieved is yet to be decided, but the most likely way is for Internet Service Providers (ISPs) to block DNS access to the specific IP address or to use a technique called DNS cache poisoning which gives back an incorrect Internet address for an internet site name.

The action being taken by the Village Roadshow is being supported by Warner Bros, Universal, Paramount, Sony, Disney and 21st Century Fox. A further action by Foxtel is aimed at sites that include the Pirate Bay.

Graham Burke has been a longstanding campaigner against movie piracy. Obviously he sees it as a threat to his own business, although he personally doesn’t seem to have been affected by the piracy having just sold one of his properties in Melbourne, Australia for AUD $7 million. His crusade against pirate sites has assumed an almost evangelical note claiming that the sites are run by

“pretty bad people. The advertisers on these websites include gambling, hookers and party drugs. It’s the pirate’s choice of neighbourhood.”

Presumably Burke hasn’t come across ad blocking software that most people accessing the site would be using.

The plan is that once Solarmovie.ph is blocked, they will move on to the expanding list of sites that offer movies to download or stream. However, as has been demonstrated countless times before, every attempt to block sites from direct access will have little effect if people are using a VPN which they are increasingly using.

To Burke’s credit, he has admitted that providing product in a “price-attractive way” and simultaneously releasing content globally is going to be part of the solution to tackling piracy. These changes were largely forced on distributors out of necessity because delaying the release of a movie would simply mean that the movie was downloaded many more times.

What hasn’t been publicised quite so widely is the fact that the Village Roadshow and others have shelved plans to implement a type of “three strikes” approach to pirates. In this scheme, rights holders would send letters of escalating seriousness to people identified as having infringed copyright, eventually resulting in that person being taken to court. The scheme turned out to be financially unviable however and so it has been dropped.

The financial non-viability of pursuing individuals in court leaves companies like Village Roadshow with the largely symbolic recourse of blocking sites through the courts. Sadly, the only people that this is going to benefit are the lawyers involved. The blocked sites will still be accessed by users in other countries and by most of their current audience in Australia via VPNs or DNS circumvention tools. Perhaps they feel that the measures they are taking through the courts will somehow publicise the issue of movie piracy and persuade the public not to engage in the practice. However, they are still battling with the perception of enormous profits that the movie industry makes on films, in part through practices that disadvantage viewers in countries like Australia.

The process of blocking sites like Solarmovie through the courts is largely going to be theatre. It will have little effect on the sites themselves, nor will it affect the Australian public’s access to these sites. Perversely, it may even boost traffic by publicising their existence to people who didn’t realise you could stream movies rather than download them to your machine. Streaming a movie is also safer as a user than downloading because it is harder to detect and therefore prosecute individuals.

As always, the Village Roadshow and the movie industry backers would have been better off spending the money they are investing in these legal actions in attempts to achieve global simultaneous release of their movies across as wide a range of platforms as possible. Until then, the show will go on, legally or otherwise.