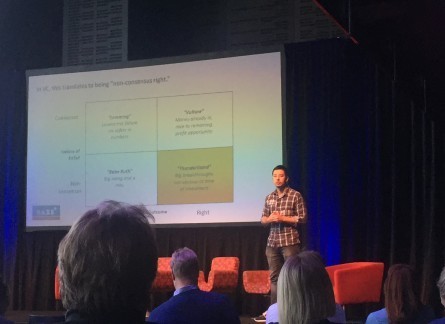 Speaking at the Daze of Disruption conference in Melbourne on Thursday, Gulati referred to these ideas as “thunderlizards” – startups like Airbnb that might not look like good investments to most of the market, but end up making huge returns on capital.

He said investors shouldn’t be afraid to go against the tech industry’s commonly-held beliefs about what makes a success.

“How valuable is consensus anyway?” he said.

“I think if you back-test how relevant and accurate predictions are, most of them are untrue.”

He encouraged venture capitalists and other investors to identify assets with the potential to transform their company’s future and back them heavily.

“It’s very easy to sprinkle resources around, but it’s very important to find the real thunderlizards and double down on them as quickly as you can because they’re the things that are going to fundamentally make you a business success,” he said.

But he also said funds should not be afraid of failure, using the career of baseballer Babe Ruth as analogy for business success.

“Strike-outs were a necessary part of the game, and without the strike-outs, he wouldn’t have had a chance to hit the big homeruns,” Gulati said.

While he admits failure isn’t something to be actively encouraged, it should be accepted as part of the game.

Not averse to risk, Gulati said his interest lies not in backing sure-fire winners, but companies that will have the greatest impact on its users’ life.

That’s the problem with ideas pitched off the back of similar successes, he says.

“I’ve seen so many Airbnb for X ideas,” he said.

“Entrepreneurs often try to increase the probability of success, but at the expense of the impact of the company.”

Looking for a winner and backing it big time – “blockbuster thinking” as Gulati calls it – requires bravery on the part of an investor but he pushed the audience to trust their own business nous.

“What do you believe in that no one else does and what can you get to earlier than anybody else?” he said.

“Make your own objective points of view.”