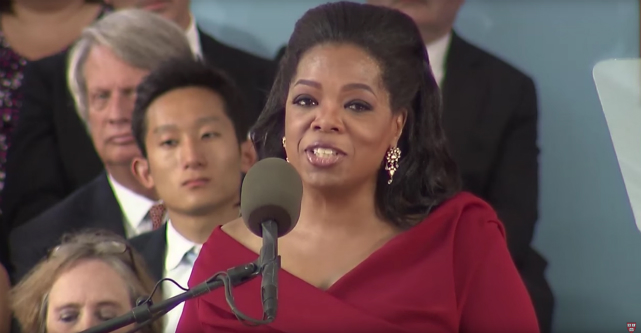 The tradition of the “commencement addresses” in the United States means that big universities invite phenomenal talent to share secrets of life and entrepreneurship with graduating classes.

Some of the most revered individuals in global business have taken to stages over the past decade to share exactly how they reached their levels of success, and any business owner with a laptop has access to hundreds of hours of these top secrets.

There are countless examples out there, but here’s some key advice from 10 millionaires – and billionaires – on propelling your business forward.

In 2005, Jobs addressed a graduating class at Stanford about the importance of following your interests in the moment in order to create the best projects later on – it was a calligraphy class he took in college years that he credited with the design of fonts on the Mac.

“You can’t connect the dots looking forward, you can only connect them looking backwards, so you have to trust that the dots will somehow connect in your future. You have to trust in something – your gut, destiny, life, karma, whatever. Because believing the dots will connect down the road will give you the confidence to follow your heart, even when it leads you off the well worn path, and that will make all the difference.”

In a piece published on LinkedIn, Branson speaks to the importance of not thinking about education simply as school and university classes, and letting your entrepreneurship be driven by your interests.

“Virgin’s expansion into so many different areas is borne out of my insatiable curiosity to enjoy new experiences and pursue fresh challenges… There probably won’t be another time in your life when you have such freedom of opportunity. Grasp it with both hands. If you can’t find an opening that fits what you want to do, why not try to create one yourself? We always enter markets where the leaders are not doing a great job, so we can go in and disrupt them by offering better quality services.”

Huffington speaks to the importance of having faith that other people’s kindness – the ‘fairytale animals” of the world – will help you along your business journey, and you should be grateful to them.

“I remember one of the low points in my life was when my second book was rejected by 37 publishers. You might have thought that by rejection 25 I would have thought ‘you know, maybe there’s something wrong here. Maybe I should be looking at a different career. Instead I remember walking down St James Street in London and seeing a Barclays Bank there. So I walked in and with a lot of chutzpah and just about nothing else I asked the manager for a loan. And that’s what made it possible for me to keep it together for another 13 rejections, until my book was finally published. I still send the manager, Ian Bell, a Christmas card, and I think of him as a helpful animal in a fairytale. So remember, throughout your life, there will be helpful animals.”

Founder of the retail giant told students six years ago to make sure they exhibited kindness in their future projects, instead of just relying on natural aptitudes and savvy.

“Cleverness is a gift, kindness is a choice. Gifts are easy – they’re given, after all. Choices can be hard. You can seduce yourself with your gifts if you’re not careful – and if you do, it will probably be at the detriment of your choices.”

The talk show queen and businesswoman told Harvard’s class of 2013 to embrace the fact that the more ambitious your life or business’s work, the more likely failure will come at some point.

“It doesn’t matter how far you might rise, at some point, you’re bound to stumble. Because if you’re constantly doing what we do, raising the bar, if you’re constantly pushing yourself higher higher, the law of averages predicts that at some point you will fall. When you do, remember this – there is no such thing as failure. Failure is just life trying to move us in another direction.”

Gates considers why enthusiasm for tech products seems to translate so much more readily than for charitable efforts, and begs entrepreneurs to think about ways of communicating a message of caring through new technologies.

“You can’t get people excited unless you can help them see and feel the impact. The way to do that is another complex question. Still – I’m optimistic. Yes, inequity has been with us forever. But the new tools we have to cut through complexity have not been with us forever. They are new. They can help us make the most of our caring.”

Poehler credits her success in the entertainment industry with the talented people she surrounds herself with, and recommends this approach for successful enterprise.

“All I can tell you today is what I have learned. What I have discovered as a person in this world. And that is this: you can’t do it alone. As you navigate through the rest of your life, be open to collaboration. Other people and other people’s ideas are often better than your own. Find a group of people who challenge and inspire you, spend a lot of time with them, and it will change your life.”

Sandberg explains how the reluctance of people to be honest in life and business can stop growth.

Page told a group of graduates about how the initial idea that led to Google was prompted by a vivid dream when he was 23 – a reminder to entrepreneurs to seize moments of inspiration without knowing where they might lead.

“I had one of those dreams when I was 23. When I suddenly woke up, I was thinking: what if we could download the whole web, and just keep the links and…I grabbed a pen and started writing! Sometimes it is important to wake up and stop dreaming. I spent the middle of that night scribbling out the details and convincing myself it would work…Amazingly, I had no thought of building a search engine. The idea wasn’t even on the radar. But, much later we happened upon a better way of ranking webpages to make a really great search engine, and Google was born. When a really great dream shows up, grab it!

Talking about the idea of a creative vision, Scorcese told a crowd to keep your ideas insulated from a world that can tear you down and find beauty in the struggle to succeed with big projects.

“It’s the work of the old masters–whoever your masters are–really that remind you that you have to be singular, inflexible, unyielding in your own work so that even the struggle, that very struggle to achieve becomes its own reward.”