“Technology is not about breakthroughs”: Alysha Naples on what your startup can do to avoid creating just another “gadget” 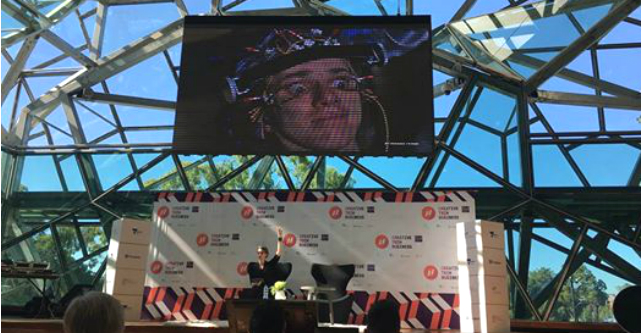 When Henry Ford or Karl Benz were first developing the ideas that would spurn their businesses, they could never have imagined their cars would one day be filled with angry people stuck in traffic jams nearly everyday around the world.

“This is an unintended consequence of a very well-intentioned technology,” according to Alysha Naples, former senior director of user experience and interaction at Magic Leap in San Francisco.

Speaking at Melbourne creative tech conference Pause Fest on Wednesday, Naples called on entrepreneurs, tech developers and innovators to pause and seriously consider why they do what they do, and how their work will impact people and the world, not just today but long into the future.

“Technology is not about breakthroughs,” she says.

“Innovation is about the unintended long-term consequences of what we celebrate today.”

Naples looked at several other examples of emerging technologies that had unintended consequences, including artificial intelligence-powered Google Photos, which mistook people for gorillas, and Microsoft’s chatter bot blunder with Tay.

“Tay” went from “humans are super cool” to full nazi in <24 hrs and I’m not at all concerned about the future of AI pic.twitter.com/xuGi1u9S1A

“They didn’t teach Tay about the boundaries of acceptable speech,” Naples says.

“It took 18 hours for it to go from humans are cool to using hate speech.”

While an algorithm may measure engagement perfectly, it does not have the ability to “understand truth from lie”, says Naples, and it’s not safe from human bias at the development stage unless conscious effort is made.

“Data and algorithms, cannot replace facts and ethics,” she says.

Are you just creating another “gadget”?

“We’re actually living a split existence,” says Naples when speaking about how people live between the real world and what’s on their screens.

With the development of artificial intelligence, virtual reality and augmented reality, the wall between real life and our digital world is blurring, but people experiencing this are still humans with actual emotions, she says.

Naples argues that “learning, sharing, playing and exploring” have always been fundamental to human life, and no technology can replace a person’s innate need to do these things.

“If your technology doesn’t support these, you’re just creating a gadget,” she says.

When creating new technology or building startups, particularly in the realms of virtual reality and augmented reality, Naples says it’s crucial to build solutions that connect, rather than isolate, people.

“How can this be solved in a way that builds connection?” she says.

“If we can learn to embrace that, we can be the most powerful force ever seen.

“We have to start by asking the right questions, these things take time.”

Uncovering the consequences of your startup

The biggest question founders and creators should ask is “why”, says Naples. It’s not about “can I”, she says. Instead, think “why I”.

When doing market research or receiving feedback, Naples says it’s critical to listen to the “essence” of what people are saying and what’s underneath their surface statements. Understanding this will help you develop solutions that deliver what they need.

“Focus on what’s really being said,” she says.

Also, consider the “unintended consequences” of what you’re building and start developing “safeguards” to address or fix these issues. If negative outcomes present themselves after you have gone to market, Naples says it’s important to be transparent and take immediate action, sharing the solutions you’re trying and what is or isn’t working.

“You have to be the bad guy as well as the hero in your story if you want the hero to keep winning,” she says.

“Throughout history the explorers and dreamers, which is probably what you see yourself as … we’ve looked at technology and making things better.

But “being good” is not enough.

“We have to really take the time to slow down and think and put ourselves in someone else’s shoes.

“Right now, we are just a pile of good-intentioned technology.”

To illustrate her point, Naples pointed to a video made by Keichi Matsude.

“This basically scared the shit out of everyone,” she says.

“People say, ‘oh this would never happen’ but I’m sure that’s what Henry Ford would have said if we were to show him the traffic jams back in his time.”

An example of conscious empathy

With the advent of online gaming came a “floodgate” of harassment against women and girls, says Naples, but one game created for PlayStation 3 was created with a very conscious focus on empathy early on.

Naples says Journey began with the premise of forging friendships around the world instead of “collecting gold” or “shooting bad guys”.

It taps into “universal emotions” by expecting people to work together and rewarding players for supporting each other.

“They wanted to create a game to allow people to really connect,” she says.

“They created a system where it is impossible t harass somebody … the absolute worst thing you can do [in the game] is walk away.

“Journey only works in this way because it’s what [the creators] decided to do.”

Occupational health and safety: How to ensure your business is covered

This Melbourne startup helps businesses see how their offices are used in real time, and it’s raised $5 million to turbocharge its growth