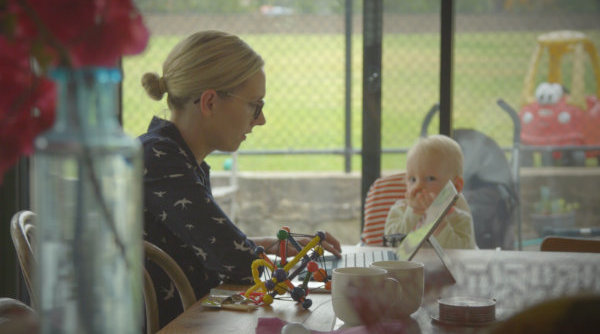 It was the night of the SheStarts showcase where the 10 winners of $100k in pre-seed funding were being announced. Hundreds were assembled at the Dr Chau Chak Wing building in Sydney.

Beautifully-groomed guests relaxed from a pre-ceremony drink (or two) while finalists tried to distract themselves from the nerves of the impending announcement by allowing themselves to become engrossed by a stellar panel including the likes of Lucy Turnbull.

My chair was empty.

I was sitting around the corner from the venue in the front seat of the car, becoming increasingly disheveled as I was trying to breastfeed my baby who wasn’t having a bar of it as my husband and 3-year-old son watched on from the footpath.

Things were not going according to plan. We had just spent the better part of an hour in Christmas party-induced traffic singing carols to the kids to keep them from imploding. The idea had been that my husband Tom would drive me to the ceremony, I’d give six month old Frankie one last feed, and then Tom would drive home and put the boys to bed.

Things had gone about as smoothly as sandpaper but too bad, we must press on. The boys piled back into the car, I attempted to wrestle my clothes back into place and regain some element of composure as I snuck down the stairs to my seat at the front of the theatre, pretending that I was not the slightest bit ruffled.

Looking back at photos of the night I may have even pulled that façade off. You couldn’t really even tell that my necklace was broken whilst struggling with Frankie in the front seat of the car.

But in reality all events leading up to that moment meant I was far from calm and in control. Both physically and emotionally, I was a category two hot mess.

And whether this is evident to the those merely looking on, that’s just my life, there’s an entire cortex of my brain devoted to being a hot mess these days.

We all suffer from a bit of imposter syndrome, myself included. Pretending we are one thing when in fact we are another. Underneath the blazer and snappy shoes, I lead an entire other life of trackies and baby food. And it’s a pretty full-on world to inhabit.

Like the analogy of the graceful swan calmly gliding along, below the water there’s a flurry of activity and mayhem facilitating movement and progression. In truth the calm swan above the water isn’t in any way an accurate representation of reality and nor should it be. In fact, I think it’s important we doesn’t pretend otherwise.

Why? Well pretending that life is perfect and easy doesn’t serve anyone any purpose. All it really perpetuates is a vicious negative-feedback loop around meeting a standard that doesn’t and shouldn’t exist. You have to be real at some point or else life just sucks.

That’s also my hope for Longevity App (we made into the top 10) — that we can build something that while it looks shiny and new it also has integrity and is completely awesome at what it does in transforming peoples future. It works hard underneath the surface (us at the back end) to make it easy for those above the surface (the user — hopefully one day some of you).

To make all this happen, I know I have no choice but to “keep it real” — warts and all, so to speak. So, while we’re being real, here are some home truths — or truths from home — about my version of “the entrepreneur’s life”.

Don’t get me wrong, sometimes there’s nothing better than wearing some clean, non-lycra based clothes, bunging on some earrings and getting my hustle on at work or a glamorous event such as the SheStarts showcase. Because sometimes when you look like you’re in control, you will start to feel like perhaps you actually are.

So that’s me, and that’s also what I want Longevity to be. Unpretentious, down to earth, but still bloody brilliant. What’s your reality?

You can follow Carla’s story — and the stories of all the SheStarts tech startup founders — in the SheStarts Documentary series at www.shestarts.com/watch.

So refreshingly honest! Thank you for that!