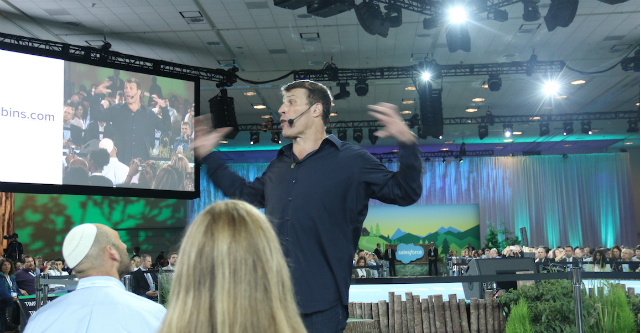 According to prominent US businessman and author Tony Robbin some of the world’s most successful entrepreneurs – many his friends – achieve their success because they decided to go out and get it.

“You and I both know business is decisions,” Robbins said

Speaking at the Dreamforce conference in San Francisco, Robbins says that these aren’t necessarily the smartest people in the room that determine the best calls, but those who are “truly conscious”.

“Decisions are not just driven by intelligence,” he said.

Robbins, who is involved in multiple businesses and philanthropic ventures, said excelling in today’s chaotic and fast-paced world requires consciousness, hunger and energy.

“The world is changing faster than ever and it’s going to accelerate,” he said.

During the conference, Robbins ran a series of activities aimed at energising the entrepreneurs, executives and other professionals in the room.

He said it’s vital to be “energy rich not energy poor” and that care for one’s internal resources including health and spirit require just as much focus to be strong a business leader.

“If there are problems in your high-energy state can you solve them quicker?” Robbins said.

To grow a company with strong business relationships, collaboration, ideas and decisions, he said all hands on deck are required to be fully focused on the mission at hand.

“Engage at a higher level with good energy,” he said.

“When you’re energy poor even smart people don’t optimise. Without energy we’re not going to maximise.”

While food, sleep and exercise can create some types of energy, Robbins said these aren’t what great business leaders use to grow their ventures.

“Energy comes from emotion – information without emotions is barely retained,” he said.

And emotion, he said, is what makes people move and take action.

“Energy is a habit – we must make sure we maximise that habit,” Robbins said.

For entrepreneurs to stay on track, Robbins says to look at three key decisions.

“What does this mean? Whatever meaning you make, this is going to motivate you.

“What are you going to do?”