Prominent US entrepreneur Tony Robbins on why your startup really failed 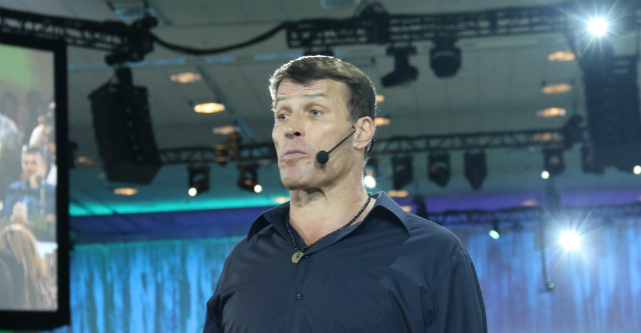 “What makes you a leader?” prominent US businessman and author Tony Robbins asked an audience of 7000 high-profile tech entrepreneurs.

Speaking at the Dreamforce conference in San Francisco, Robbins says that it’s not just being able to motivate a team.

“A leader gets results,” Robbins said.

“How do they do it? They maximise resources.”

But with companies like Salesforce set to creating 1.9 million jobs for San Francisco in the coming years after starting with next to nothing, Robbins said the real reason failure happens is a lack of resourcefulness.

“Resources are never the real problem, we all know that it if we look around,” he said.

“I grew up dirt poor, we had no money for food.”

Now Robbins is an active philanthropist and business founder that’s worth half a billion dollars.

“Your worst experience in your life can become your best,” he said.

With a growing number of people coming into the workforce from a 21st century education environment, Robbins said many enter the field with a lack of energy, personal insight and understanding of their true calling.

“You’re taught to sit down, be quiet, be passive,” he said.

But with collaboration and discussion between peers a key ingredient of some of the world’s most innovative and fast-growing companies, Robbins said people must “break out” of conditioned behaviour and conventional thinking.

And the secret to being resourceful, he said, comes from some deeply undervalued attributes.

“It’s some form of human emotion we’ve learned to value less and less,” he said.

“Creativity, joy, love, determination, flexibility – with those things, there’s nothing we can’t get.”