A turning point: What does Afterpay’s $39 billion acquisition mean for the future of BNPL?

The Australian startup, fintech and business worlds were rocked yesterday with the announcement that payments giant Square is set to acquire homegrown buy-now, pay-later (BNPL) pioneer Afterpay for a whopping $39 billion.

Touted as the biggest acquisition in ASX history, it’s a deal that, if it goes through, could cement Australia’s reputation as a global tech hub.

However, it could also mark something of a sea change in the BNPL sector.

In the immediate term, the deal looked like good news for the burgeoning Aussie sector. Zip’s share price saw an 8.4% bump off the back of the announcement, while smaller listed players including Humm, Sezzle and Openpay saw modest upticks, too.

However, speaking to SmartCompany yesterday, Jason Andrew, chartered accountant and founder of accounting and operational finance firm SBO, suggested the news will likely get the executives of other BNPL players thinking.

In the space of just a few months, this sector has become uncomfortably crowded. While Klarna has muscled in on the Aussie landscape, ruffling a few feathers as it did, its partner CommBank also entered the arena, offering a BNPL option to its customers with no cost to the merchant.

CommBank’s announcement came just a week after PayPal showed its hand, revealing plans to offer a deferred payment option to its Aussie merchants, also without any additional fees.

And just weeks ago, Apple also announced it is working on a new service that will allow consumers to pay in instalments for purchases made using Apple Pay.

These are organisations with deep pockets and huge existing customer bases.

While Afterpay had the first-mover advantage, there are a lot of other, smaller players in the market that may now struggle to keep up.

Equally, Andrew noted BNPL services are becoming increasingly commoditised, or featurised. A business like PayPal, and now Square, can offer BNPL as part of their broader service. for example.

To be a standalone provider of only BNPL services is likely no longer enough, he suggested. Fintechs need to either partner up with other entities, a la Afterpay, or expand to offer additional services.

“There needs to be more value proposition, for sure,” Andrew said.

The writing’s on the wall

According to IBISWorld data, the number of credit cards in use in Australia has been steadily declining since the 2016-17 financial year, while BNPL revenue has been on the up. 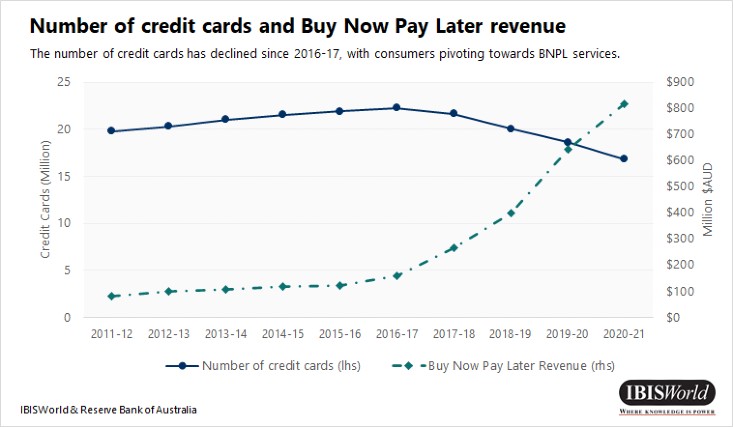 The writing is on the wall and the big, traditional institutions are seeing it.

“We are likely to see more larger banks and financial institutions looking into purchasing the rest of the BNPL platforms,” Yeoh tells SmartCompany.

“This is one of the most lucrative and most popular areas for the younger generations at the moment.”

If and when Afterpay’s acquisition is finalised, Zip will be the largest player in the Aussie market, and likely the most coveted.

Commonwealth Bank, of course, already has a stake in Klarna, while Westpac has a banking-as-a-service partnership with Afterpay, and is partnered with Humm in New Zealand. NAB also has its own zero-interest credit card offering.

Where Afterpay was leading the way in the sector, the big banks are now scrambling to catch up, Yeoh says.

A new era for Afterpay?

Afterpay has not been without its controversy. The whole BNPL model has come under fire, with critics questioning whether it is good for consumers and merchants alike.

The sector has also escaped formal regulation, instead adhering to a code of practice drawn up by the leaders of the biggest players.

Now, all the activity, including from the incumbent banks, has the potential to bring a certain sense of legitimacy to a scrappy industry.

But, when it comes to Afterpay at least, Yeoh says it depends largely on whether Square absorbs the Aussie company, adding the offering to its own suite of products, or keeps it operating as a subsidiary.

The latter would mean Afterpay continues to operate as a BNPL platform in muddy regulatory waters. However, if it’s integrated, that could see BNPL in general becoming “more formalised”, says Yeoh.

Afterpay is set to be acquired by Square, the payments giant headed up by Twitter founder Jack Dorsey, in a deal worth $39 billion.

Australia’s financial counsellors have called the ad "disturbing" and "inappropriate", and have reported the campaign to Ad Standards in an attempt to have it removed.