While Hollywood has yet to come beckoning with a movie proposal for its 30-year-old wunderkind, Afterpay’s stellar rise will no doubt get decades-long case study attention from business and MBA courses as it crashes past Facebook-level valuations.

Since being founded six years ago, and listing just two years later with a valuation of $140 million, Afterpay recently hit a monstrous $30 billion value in its market cap.

Its share price barely had time to take a breath during the pandemic shake-up in March, after which the company found that sales actually accelerated as its retail partners moved sales online.

As a comparison, at a slightly later stage for Facebook back in 2010, TechCrunch reported that offers to buy its stock on SecondMarket, a marketplace for private companies, equated to a value of $19.8 billion.

Afterpay’s recent price peak put it at an enterprise value of over 32 times forecast revenues for 2021, more than three times the multiple of Facebook.

The irony, which is likely not lost on retailer CEOs, is that Afterpay has now rocketed past the market value of its retailers, which rolled out the red carpet for the buy-now-pay-later provider in the first place.

Without retailers having plastered the Afterpay brand to their customers, few would have been curious about what it was.

There is little actual intrinsic value served by Afterpay’s primary product, which is purely facilitating consumers to buy clothes and other everyday items.

I have heard that almost 24 hours after being turned on by a retailer, Afterpay can represent 25% of payment selections by customers.

It certainly must frustrate retail executives to see their margins gobbled up as they authorise the placement of Afterpay stickers in shop windows and in front of millions of consumers’ faces as they go through retail-owned payment journeys.

As many experts have pointed out, similar buy-now-pay-later services have been around for a long time.

Despite all of the focus on how Afterpay created a simple service that young consumers flocked to, it was actually the ability of the founders, Nick Molnar and Anthony Eisen, to build a sales ecosystem to leverage the partner multiplier effect early on, which fired up the contagion of Afterpay’s spread.

There is no denying the viral nature of the product, but no amount of marketing spend could have delivered consumers to its doorstep without all of those retail partners doing the heavy lifting on awareness, distribution and instant credibility. 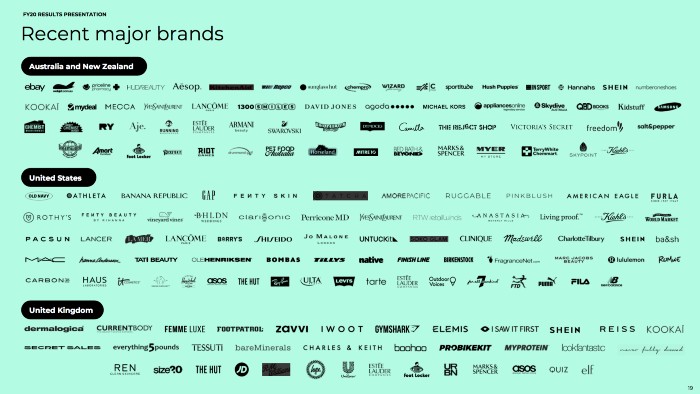 It was the multiplier effect that ensured millions of buyers were made aware of an easy and trustworthy way to increase their buying power, without the handcuffs of credit card debt — right at the point of purchase.

It was Molnar’s natural sales ability to convince the first retailer partners that got the ball rolling. From the success of the early Afterpay experiment on his family’s online jewellery story, Nick and his brother Simon encouraged customers to contact others.

“We went out to all these highly passionate customers and said to them: ‘Which retailers do you want to have Afterpay? Go and let them know’. The customer base started doing our sales. I think some retailers had to switch off their feature request board because it was inundated.”

From there, Molnar was able to show results: a 22% increase in conversion and a 20–30% increase in average orders.

Human psychology kicked in as traditional retailers scrambled to get on board alongside competitor brands, desperate to drive new revenue when store sales were falling through the floor.

Timing is everything, but what a beautiful ecosystem.

The secret to Afterpay partner deals

Few people comment on the canny small print that Molnar and Eisen struck in their retail partner deals along the way. Every agreement was loaded with requirements to ensure that Afterpay was the star attraction.

Take a look at the first partner deal that Afterpay completed internationally, in the New Zealand market in 2017, where it had zero presence and brand awareness.

Under the agreement, Afterpay was launched in dazzling lights as the exclusive buy-now-pay-later option available to Trade Me merchants and customers.

It was an exclusive market coup delivering instant gravitas. Who needs marketing?

Let’s also look at one of Afterpay’s more recent US deals with retail group Urban Outfitters. With more than 600 retail stores, not only was Afterpay marketed in-store, but the brand is still promoted on the front page of Urban Outfitter’s websites, not once but twice. It’s also the only payment option to be listed.

As this approach has snowballed, new retailers have copycatted others, launching ever larger Afterpay promotions in attempts to catch-up or outdo their competition.

The human psychology of momentum

This has shown the common dynamic that has emerged in the Afterpay story: the ‘peer pressure’ speed of merchant deployment.

In its home market of Australia, early merchants quickly obtained a competitive advantage, which forced others to either adopt the service, which was unique at the time, or risk losing business to competitors.

It has resulted in a huge, long-tail of merchants adopting buy-now-pay-later offerings at a rapid pace.

Even though there are now plenty of retail grumbles about the ‘expensive’ 4% average fee that Afterpay charges, with some executives selecting alternatives such as Zip in Australia or Affirm in the US, the company continues to take advantage of the size of its partner network to convince others to sign.

As plenty of Afterpay’s institutional investors have stated, momentum has an incredible role to play.

The US is still a wide-open market with a lot of runway left and a land-grab of sorts is going on.

Seasoned tech investor, Cyan Investment’s Dean Fergie, said while there is an argument that the US market is big enough for more buy-now-pay-later players to co-exist, he’d “prefer to put more money on the leading player”.

“They really do have so much momentum,” he said.

The Australian market in 2021 will be a lead indicator for whether the individual usage will start to plateau or continue to eat into the traditional credit card market.

Whether the land-grab ultimately sticks to Afterpay, once the market is saturated, is another thing. 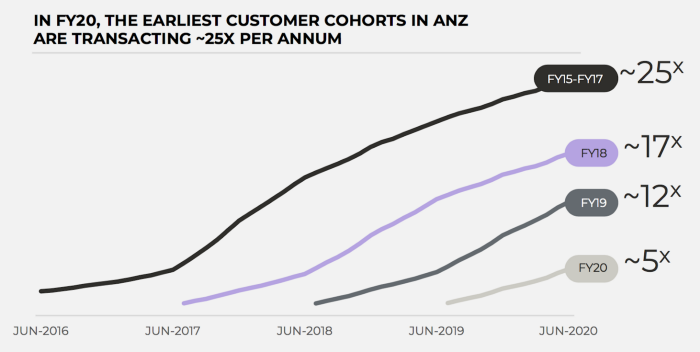 The value of the partner ecosystem

Cleverly, the two co-founders, who are no doubt kept awake by the low barriers to entry, stress repeatedly and heavily, that the real value of Afterpay is its ability to push up sales for merchants.

“In lots of cases with global brands we are a more effective traffic driver than Google or Instagram,” Nick Molnar said last year.

This is a mantra that has been chanted by company collateral and the executive team for a few years.

They are working hard to become a leading customer marketplace in their own right, without explicitly saying so and risking the ire of their retail partners.

For now, its 3 million-plus app downloads and loyalty program are being promoted as lead generators.

While many investors have argued for Afterpay to better monetise its consumer data and marketing contacts, I get the sense that the founders know that they walk a tightrope.

Large incumbents such as Visa, PayPal and banks are now jumping over each other to launch new but-now-pay-later offers into the market.

Take away Afterpay’s partner network, and the ability to purchase products that consumers want disappears. And so does the growth and market capitalisation along with it.

Is the service replaceable to consumers? Yes.

Is it unique? No.

The race that Afterpay now has on its hands is to work out how to continue to grow the partner multiplier effect that it has created as the market matures, lest the tide turns and there are no more new products left to sell.

Ultimately, it is up to their retail partners to decide.

PS: the author is not proud to have recently found an email commenting on Afterpay’s IPO in 2016 reiterating his tech brokers advice that the $1 list price was too expensive. A favourite image is this excel spreadsheet from their IPO slides, showing their growth from less than 10 merchants. 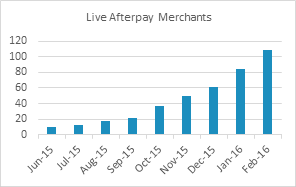 This is an edited version of an article first published on Medium, which has been republished with permission.

New Aussie share-trading startup Superhero has burst into the market with a fresh $8 million in capital and some well-known backers.

Afterpay is making a play in the mainland European market, through the acquisition of Spanish fintech Pagantis for at least $82 million.