The volume of startup funding deals in Australia is trending down again, with a total of 64 funding deals recorded in Q3 2020. That’s almost 50% down on the same period in 2019, when 124 deals were recorded.

According to Right Click Capital’s quarterly Internet Dealbook report, there were also fewer large deals compared to last year, with the total value of deals plummeting from $910 million to $387 million.

That also meant the average deal size dipped from $9 million to $8.4 million, although, as we explored when analysing the Q2 dealbook results, that’s not necessarily a bad thing.

There was a relative burst of activity during July, with 31 funding deals completed, compared to 39 last year. That’s the most deals recorded in any one month in 2020 so far.

But the following months saw the funding slump return, with only 15 deals recorded in October and 18 in September. That’s compared to 36 and 49 deals in the same months in 2019, respectively.

In 2020 so far, the Internet Dealbook report has recorded 180 funding deals in Australia. At the same time last year, the total for 2019 stood at 313. 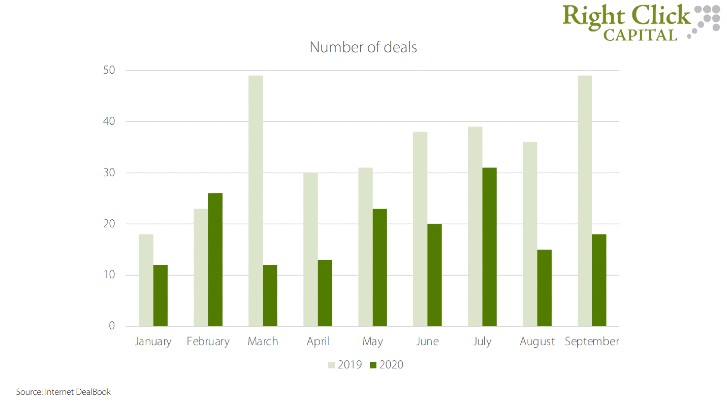 Disappointing, but not disastrous

He notes the continuing COVID-19 crisis, which may have investors avoiding particular industries, thereby reducing the pool of investable businesses.

“For such investors, it can take time to align on desired trends and build relationships with founders.”

Chong also suggests we may still be seeing investors focusing on supporting the businesses in their existing portfolios, ensuring they’re in a position to survive, and so holding off on new investments.

It’s notable that Q3 2020 played host to the worst of Melbourne’s second COVID-19 lockdown, which may have affected deal flow in Victoria.

Still, the numbers are still higher than what we were seeing in March and April.

This perhaps reflects the success in controlling the virus in other Aussie states, Chong says. But his positivity also comes with a warning.

“A third wave and further shuttering of the economy may change this moving into Q4 and 2021.”

But, it’s not all doom and gloom.

Chong says he has noticed a tentative return of angel investors to the market, who are “demonstrating an appetite to invest in early-stage technology companies, particularly SaaS”.

He also notes that it’s very possible more deals have been finalised, but that both startups and investors are holding off making the news public.

Whether they’re waiting for a more stable market, or until they’re ready to hire new people, or make a big move, that could mean the balance is redressed somewhat in Q4.

“Given current conversations with founders and investors, we expect Q4 will be a more buoyant quarter,” Chong says.

COVID-19: The financial future is bright for the brave and the bold

As investors and founders stare down the barrel of an uncertain future, exactly how bad is this situation we are all in together?