Quiet achievers and COVID successes: SmartCompany’s 10 startups to watch in 2022

It’s been yet another challenging year for all businesses, but the Aussie startup sector has still been abuzz with activity in 2021 — and that’s putting it mildly.

But amid the raises, acquisitions, grants, partnerships, growth stories and everything in between, there have been a few startups that have caught our eye.

Maybe they’re raking in the big bucks or launching their Aussie-grown products overseas.

Or perhaps they’re the quiet achievers — those we don’t think will be under the radar for much longer. Some have simply tapped into trends that are about to take off.

Either way, these are the startups we think we’ll hear a whole lot more from in 2022.

Founded in 2017 by Sarah Agboola, mtime has been ticking along somewhat under the radar since.

The for-purpose business provides in-home help for busy parents at any stage of their journey. Parents are matched with fully vetted and trained ‘moncierges’ who can help them with errands, chores, cleaning, babysitting and more.

Over the past 12 months, the opportunities in quantum computing have become much clearer, and among a few of the Aussie startups at the forefront is Quantum Brilliance.

Born out of research from the Australian National University, the business focuses on building quantum accelerators that can enable quantum computing on a small scale in all manner of different environments.

Bloom Impact Investing taps into a confluence of 2021 tech trends: a focus on sustainability; a transfer of wealth to younger generations; demand for democratised trading opportunities; and a growing interest in impact investing.

The startup is designed to make impact investing more accessible to everyday Aussies, allowing them to invest as little as $500 into a diversified portfolio of clean tech and clean energy companies.

Pre-launch, it has attracted support from influential angel investors and founders of Envato Cyan and Collis Ta’eed.

In this article in SmartCompany Plus, we unpack the relationship between founder Camille Socquet-Clerc and Cyan Ta’eed, to find out what makes an early-stage investment work (even when the pandemic means no one has met in person). 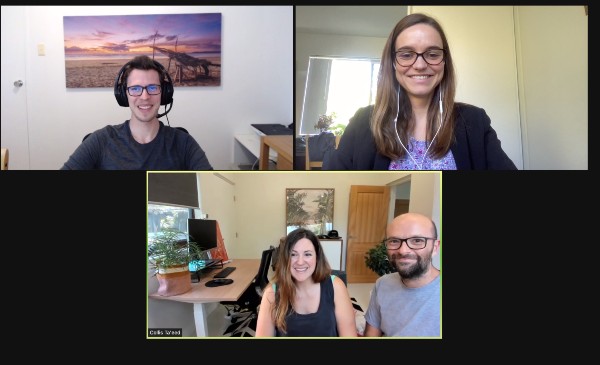 Bubble Tea Club was founded by 20-somethings Pam Yim and Jenny Li after they found themselves unemployed at the beginning of the COVID-19 pandemic.

Since then, their home-brew bubble tea business has turned over millions in revenue. In June 2021 the business raised $1.65 million through a Birchal equity crowdfunding campaign, and the founders have since hired more than 30 staff.

The campaign also received the highest number of expressions of interest ever seen on the platform.

Revenues are growing at a rate of 400%, year-on-year, co-founder Mina Nada told SmartCompany, and they’re not showing any signs of slowing.

There’s an “increasingly clear opportunity of scale here”, he said.

It’s been quite a year for non-alcoholic booze businesses, and Aboriginal-founded and run Sobah is no exception.

Founded by Gamilaroi man Dr Clinton Schultz — a psychologist and former chef — along with his wife Lozen Schultz, Sobah serves up alcohol-free craft beers infused with the flavours of native bush tucker.

In October, Sobah raised its maximum target of $1 million through an equity crowdfunding campaign.

That funding is pegged for fitting out a dedicated brew house and ramping up production to meet demand. But Schultz also sees the business as a vehicle for social good.

“We wanted to develop something that had a greater purpose than just the product,” he told SmartCompany.

A graduate of the Startmate accelerator, Milkdrop was founded by engineer Alex Sinickas to give women a more comfortable experience when using a breast pump.

The startup is another recipient of funding through the Alice Anderson Fund, and also secured an Amazon Launchpad Innovation Grant in July this year.

The product is a cushion to use with the breast pump, putting “the experience of the woman is firmly at the centre”, Sinickas told SmartCompany in July.

Now the business is reportedly developing its own next-generation pump, and also considering expanding into the US.

Another somewhat quiet achiever, The Peers Project founder Michelle Akhidenor uses her podcasting business to help give brands an edge on their marketing, but also to highlight and amplify diverse voices.

In 2021 alone, Akhidenor partnered with Alibaba on a series about young Aussie entrepreneurs, and with Indeed on a new podcast promoting diversity and inclusion in business.

Shopify has also signed on as the first major sponsor of the startup’s flagship internal podcast Peers2Peers.

At this year’s Pause Awards, Akhidenor herself was awarded the ‘prodigy’ award for a young person with ‘exceptional qualities or abilities’.

Having burst onto the market with backing from Zip’s Larry Diamond in late 2020, Superhero has gone from strength to strength over the past 12 months.

A share trading and superannuation platform, Superhero went on to raise $25 million in April 2021, and another $15 million in October.

The business now has some 135,000 users on the share trading side and about 2000 members for its superannuation offering, which launched in July.

Now founders John Winters and Wayne Baskin are eyeing a move into cryptocurrencies.

Winters wants to set Superhero up as a trusted brand that will “give people more comfort in sort of dipping their toe into the crypto space”.

It’s been a big 12 months for the local and global space tech industry, and when Richard Branson launched the maiden flight of his satellite taxi service, an Aussie startup had precious payloads on board.

Spiral Blue launched two of its Space Edge Zero (SEZ) image processing computers, meaning the team was able to start end-to-end testing of their tech, which allows for in-space processing of satellite imagery.

According to chief executive Taofiq Huq, Spiral Blue’s tech will “help democratise Earth observation, making it available to everyone, even subsistence farmers in my native Bangladesh”.

That will also allow the business — a graduate from the Catalysr accelerator program for migrants and refugees — to work with other Aussie space startups, further fuelling growth in the sector.

A still from the livestream of the Satellite Payload Bay in flight. Source: Virgin Orbit.

The best read SmartCompany Plus articles from 2021

The best read articles from SmartCompany Plus in 2021 include recruitment tips, growth stories and inspiration for the new year.

Rokt raises $458 million, as Aussie startups continue to cash in

Aussie founded Rokt has bagged $458 million in Series E funding in one of the biggest ever venture capital raises for an Australian business.