In this extract from her new book, Seize the Yay, Matcha Maiden co-founder Sarah Davidson shares her encounter with impostor syndrome in the very early days of launching her business.

Allow me to run you through an example of how my self-doubt very nearly sabotaged Matcha Maiden before she was even born.

Reflecting on this close call years later, with the benefit of hindsight, has made me desperately passionate to help others distinguish between reasonable concerns and the fallacies of impostor syndrome.

As I’ve mentioned, at the start, our goals for Matcha Maiden were quite conservative. At best, we envisioned it being a one-off side-hustle that would allow us to sell the excess powder that we couldn’t consume ourselves and recoup a bit of cash in the process.

At worst, we would fail to sell anything at all, in which case our net position would be almost the same as it was if we’d never had the idea at all — so it wasn’t really a ‘worst case’ at all.

In hindsight, this was a relatively low-risk endeavour. We’d already paid for the stock, both of us were keeping our existing income streams, and we were investing very little funding into the infrastructure in favour of a DIY build-your-own-website, pack-your-own product situation.

Amid all our excitement, self-doubt crept nimbly into my mind from the beginning. Rather than focusing on the opportune gap in the market, our combined transferable skills and the fact that we had very little to lose even without those things going for us, I became consumed with the barriers, limitations and every way that things could go wrong (which, to be fair, is exactly what lawyers are trained to excel in, so my journey has involved a lot of unlearning).

Among the most glaring barriers was, undoubtedly, the fact that we had absolutely no qualifications or experience in importing, manufacturing, or food.

If you are considering a similar life change or a new project, I don’t necessarily recommend choosing the option that’s the furthest possible one from your strengths and experience to jump into headfirst, like we did.

However, even if you do, you will find out over the coming chapters that this is still no reason why things can’t work out wonderfully. In fact, sometimes the naivety and untainted perspective of being a complete outsider can actually work in your favour.

But it does mean your self-doubt radar might go off with a special fervour reserved just for those full-body leaps outside of the comfort zone. 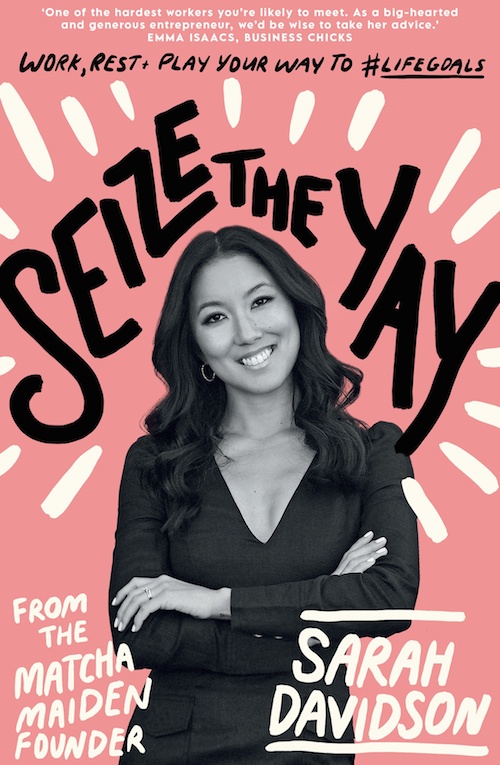 This was precisely the case the very first time I nervously pitched the idea for Matcha Maiden to a third-party beyond our immediate family to get some feedback or pointers in the right direction.

Nic and I were, and still are, very lucky to be surrounded by friends who also happen to be wonderful entrepreneurs and business owners who have forged a path ahead of us and shared their knowledge and resources generously many times over.

The importance of who you surround yourself with, in the crucial stages of a new beginning (or any time, really), is such that it has its very own chapter later in this book.

But people whose support and guidance warrants mentioning early on are the founders of Frank Body, the coffee scrub and skincare sensation that broke the internet and catapulted Aussie businesses onto the global landscape.

Prior to founding Frank Body, three of the founders had started the copywriting and creative agency, Willow & Blake. Nic had been heavily involved in that company early on, leading us to develop a great friendship with those women and the two lads they later developed Frank Body with.

In the weeks before we launched our business, I turned to one of the lovely co-founders Jess Hatzis to run our little business idea by her. I wanted to temperature check the structure of our business, as well as the name, logo and launch strategy that we had planned with someone who knew the ropes.

I’d known Jess for a couple of years by this point, and I really admired her business brain, creative vision and humility (which I have continued to admire through our years of friendship). Since the power of a good first impression is universally acknowledged, you’d think I would have pushed our idea to its most optimistic limits and put our very best foot forward when presenting Matcha Maiden to Jess. After all, this was the first external feedback we’d ever had.

And yet, reading back through our Facebook conversation years later informs me that my choice first words were that I was working on ‘a mere imaginary distracting time-passer at work’ that probably wouldn’t go much further than a daydream. Not the strongest of openers in hindsight.

Thankfully, I did mention very briefly that we had a great opportunity to be the first to market matcha in this health-focused way, as well as the many wonders and beneficial properties of the powder itself. But the bulk of my message was taken up by

So strong was the intensity of my impostor syndrome that I was pre-empting our complete failure before we’d started.

Now, with a more objective perspective, a bit of maturity and a lot of self-work, I can see those feelings were a natural protection mechanism — which is not, in itself, a bad thing — but, if I’d given too much weight to those feelings, they could have prevented us from starting Matcha Maiden at all.

You’ll have gathered by this point that I did eventually end up emerging from the vicious sea of self-doubt so that we could start the business, and it didn’t crash and burn in its first few days as I had feared.

But now you also know how easily we could have scrapped the idea altogether had it not been for Jess’ warm encouragement stopping me from falling over the edge.

Much to our surprise, it turned out there were so many other people around the world waiting for someone to close the gap for accessibly and well-marketed matcha. Thanks to them, we somehow sold out of everything including our own personal stash of matcha powder within a mere seven days of launching our online store.

To prove how ill-equipped and unprepared we were for any kind of growth or success, we couldn’t even find the original matcha tea supplier’s details to re-order the product, having never anticipated that we’d need to use them again.

And yet, at the time of writing, we’re still here over five years later, several million serves of matcha deep, with warehouses in Australia, the United States and Europe, and supporters including Victoria’s Secret Angels, elite athletes and leaders in the health and wellness industry.

As I write this, the ink is barely dry on a new investment partnership opening up a bright-green future ahead. And we almost stopped ourselves ever knowing it was all possible.

Those very early stages of choosing whether to begin at all truly exemplify the theme of this chapter, and still give me the biggest rush to reflect on.

It astounds me to think we could have very easily been scared off from trying and never seen how wonderful Matcha Maiden could become or what other opportunities it could lead to.

This makes me passionate about helping others recognise and challenge their self-doubt reflex and have a chance at overcoming it.

I don’t mean to say thoughts of self-doubt should disappear altogether — I believe they are a healthy indication that I care about what I’m doing and that I haven’t developed a blind spot to my weaknesses or areas for improvement. It’s more that I want to illustrate the dangers of letting those thoughts dictate your decisions at the expense of your dreams.

My hope is that you can learn to acknowledge them with a knowing smile, but gently pushed them aside and get on with things.

Images and text from Seize the Yay by Sarah Davidson. Murdoch Books RRP $32.99.

NOW READ: How Pamela Jabbour learnt to get over impostor syndrome