The first cohort of aspiring entrepreneurs graduating from the Sydney School of Entrepreneurship’s (SSE) pilot unit are commencing their entrepreneurial journey with an unlikely source of inspiration: a personal message of support from Jeff Bezos.

The Amazon founder has joined prominent local entrepreneurs, including Shark Tank judges Naomi Simson and Janine Allis, in sharing words of encouragement to the students who have spend two months immersed in the Sydney startup scene.

The SSE’s pilot unit — dubbed ‘The Navigator’ — kicked off in August and involved 60 university students from across New South Wales taking part in online and face-to-face study to learn how to cultivate an entrepreneurial mindset.

The Navigator unit was led by the University of Technology Sydney (UTS) and supported by Macquarie University and Charles Sturt University.

The SSE is described by its chief executive Nick Kaye as a “wonderfully unprecedented” partnership between all 11 New South Wales universities and TAFE NSW. It was established this year with a $25 million cornerstone investment from the New South Wales government.

The first cohort of students have been participating in hands-on workshops, ecosystem scavenger hunts and online learning portals, but it wasn’t until graduation night that they experienced their first brush with international startup fame.

When students first entered the program they had written down the names of their startup idols: the industry leaders, hustlers and innovators they must admired.

Unknown to the students, SSE staff had then reached out to these industry heavyweights, and upon graduation students received surprise words of support from Thankyou Group’s Daniel Flynn, video messages of support from RedBalloon founder Naomi Simson and Boost Juice founder Janine Allis, and a personal letter addressed to all graduates from Amazon’s Jeff Bezos.

Taking time out from building a worldwide delivery empire and briefly becoming the world’s richest man, Bezos penned a letter to the graduates that set a reassuring, supportive tone for their future entrepreneurial endeavours.

“I imagine that most of you are contemplating your next step in life,” Bezos said in the letter.

“Should I go to graduate school? Should I start my own thing? Whatever you choose, I encourage you to find something that captures your curiosity and follow it.

“Don’t chase the wave, let the wave catch you.”

For the graduating cohort, Bezos’ words of encouragement capped off their experience in the program and gave them added confidence.

“It was pretty surreal, the entire experience was topped off perfectly,” Esmond Ye, a 19-year old participant in the program, tells StartupSmart.

For Ye, getting words of encouragement from someone who inspires him reinforced his passion for innovation and entrepreneurism

“Obviously he’s definitely someone who a lot of us looked up to, but what I found was striking is although he’s such a busy person he still had the time to sit down and write to us,” Ye says.

“Some of the stuff that we already knew, but having that reinforced by someone of his caliber was amazing.”

Buoyed by Bezos’ words of encouragement, Ye has now founded his own startup as a result of the program, launching The Entrepreneur’s Internship with three other students he met in his cohort: Patricia Sullivan, Harrison Chen and William Lamb.

The Entrepreneur’s Intership looks to provide “innovative internships” for entrepreneurs, Ye says, and it was the Amazon boss’ support of potential failure that reinforced the value of getting out there and giving a new startup a go.

“His words were very sincere, down to earth and relateable: it wasn’t “Do X,Y,Z to be like me”, instead he talked about how failure is inevitable, and that it’s how you bounce back that determines success.”

Indeed, Bezos’ advice for the budding entrepreneurs was a clear reminder that startups, innovation and failure go hand in hand.

“When we’re young, we embrace trial and error, that’s how we learn and we’re never embarrassed. As we get older, it’s not as cool to fall down, and we sometimes forget that failure and invention are inseparable twins.

“I encourage you to try it, and I’ll be cheering for you as you go on to do big things.” 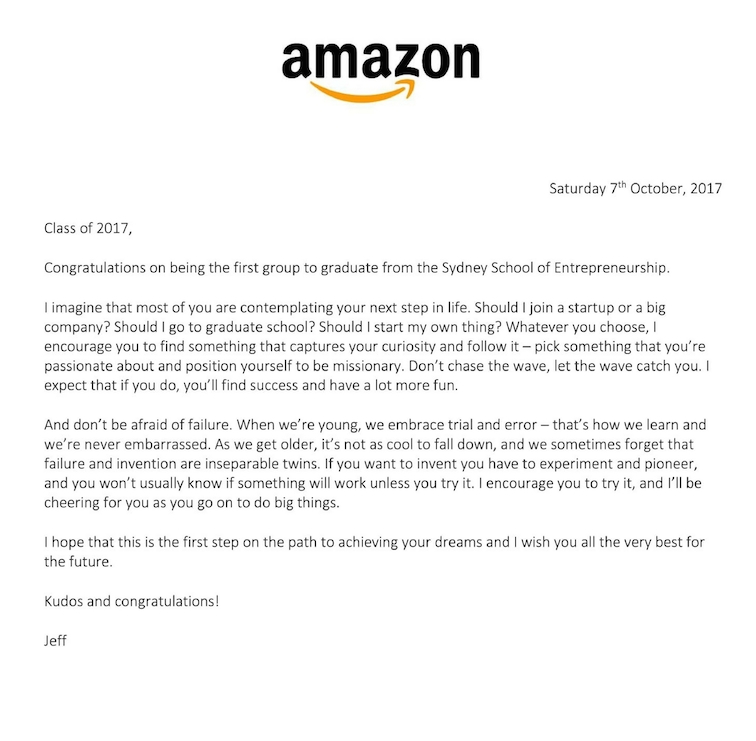