The ABC has this week asked the question as to whether “Australia is on the brink of becoming a completely cashless society”. The question was sparked by the recent release of figures by the Reserve Bank of Australia (RBA) showing a continued decline in Australian’s withdrawing cash from ATMs. ATM withdrawals are now at a 15-year low and have been declining between 6-7.7% for the past three years.

The tipping point however, may be reached with the launch, later this year, of the New Payments Platform, an initiative of a consortium of companies, including the RBA. Applications built on top of the NPP will allow Australians to send money to any other person or business and have that transfer happen in real time, including outside of banking hours. NPP will also support identifying the receiver by an email address, telephone number, or in the case of a business, by their business number or ABN.

It is this functionality that has been pivotal in allowing Sweden, the world leader in the race for countries to become almost cashless. In 2015, cash transactions made up 2% of all value payments in Sweden and Swish, the most popular of the apps that allow the transfer of money in realtime between Swedes, is used by over 50% of the population to make over 9 million payments a month.

The same is likely to happen in Australia, which is rapidly adapting to the convenience and security of tap and pay and mobile payments like Apple Pay and Android Pay.

Another catalyst for increased use of cards will be the reduction in fees banks are allowed to charge businesses for processing credit cards. This should put an end to businesses needing to add surcharges for customers using a credit card and get rid of the distinctly unfriendly $10 minimum spend. So from July 1st, a $4 cup of coffee will have a maximum fee of 3 cents.

The advantages of a cashless society are absolutely clear. Australia’s black economy, fuelled entirely by cash transactions is estimated at between 2 – 15% of the gross domestic product (GDP). The majority of this is what is called “underground production” or things like cash-in-hand jobs that are not reported and so no tax is paid on the earnings.

For small businesses, the benefits are mostly in the time saved in not having to handle cash, deposit it at the bank and also in the security of not having cash on the premises. 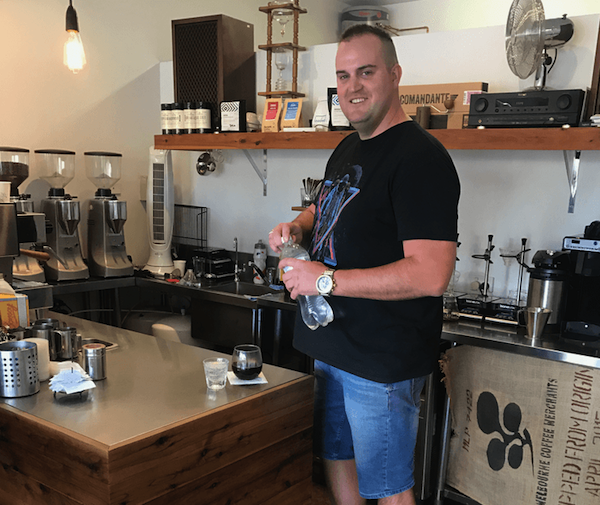 In the case of one small business owner I talked to, cashless was definitely the future. Mitch Smith, owner of Felix & Co, a local Perth specialist coffee shop, said that about 70% of the company’s payments are cashless. Felix & Co does not charge for using a card and has no minimum spend. Fees are essentially accommodated in the prices. However, Mitch Smith couldn’t see the business going entirely cashless in the short term, as that would involve a process of handling a potential “backlash” from customers still wanting to use cash rather than cards.

As he explained: “Whenever we make a major change with what we do, there is an education process we have to go through explaining why we have made this decision. If you were starting a business from afresh people would come to know that is what is expected when they go to that venue”.

As part of a greater opposition to a cashless society are the concerns over privacy. If each transaction is electronic, it can theoretically be tracked, at least by the banks, and it is this tracking, and what that data may be used for, that concerns some consumers. These concerns, however, should be handled by governments and banks agreeing to a code of conduct, limiting what this data can be used for, in the same way that there are restrictions in some countries about the use of tracking on the Internet.

In answer to the original question posed by the ABC as to whether Australia could be cash free by 2020, the answer is that it is possible, but extremely unlikely. In 2013, cash payments represented 47% of all transactions in Australia. Declining rapidly, but still a long way from being zero.

Australian banks are still holding out on supporting some mobile payment systems like Apple Pay, which will also delay the move to a cashless society. Whilst people may have stopped carrying around cash, there is a growing number of people not carrying cards and relying just on their phone for payments.

Finally, there are still a significant number of older people and those as mentioned before who want to continue using cash for privacy and other reasons who will continue to hold out.

David Glance is director of the UWA Centre for Software Practice, at the University of Western Australia.

I suggest everyone go and look at this link
https://www.yourlifechoices.com.au/news/do-you-fear-a-cashless-society#comment-486572