Australian entrepreneurs on what President Trump means for business 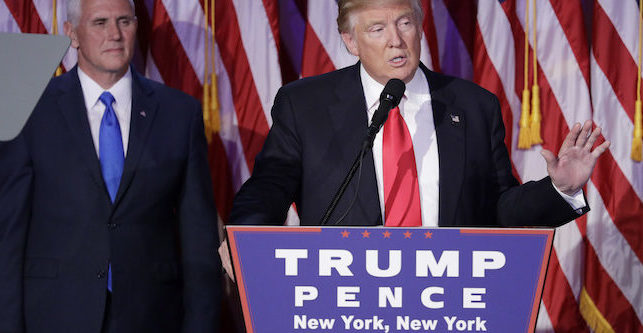 As the unexpected result of the 2016 US Election sends the world reeling, Australian business owners are left wondering what the future holds.

Republican property mogul and international businessman Donald Trump will be the 45th President of the United States, after clinching approximately 280 Electoral College votes in yesterday’s election, with some states still being counted.

Only 270 votes were needed to claim the presidency. The Republicans have also secured majorities in the House and the Senate.

Trump secured victory over Democratic nominee Hillary Clinton, who was widely regarded as the popular choice for the position. Clinton claimed only 228 Electoral College votes.

With sharemarkets taking a plunge ahead of his announcement yesterday, and Trump’s lack of support for the Trans-Pacific Partnership, the Australian business community is wary of potential instability moving forward.

We asked a number of Australian business owners for their reaction to the election outcome.

“I don’t think people were expecting it, I certainly wasn’t expecting it to be him. I was refreshing the results constantly and I couldn’t believe it going [was] red so quickly. In the end, people were voting for the lesser of two evils, but I was surprised at the participation rate. I kind of thought people would go “I don’t have to vote so I won’t support either one.”

“It will be interesting how much freedom he will get to get stuff done, to do what he wants to do. Will the system prevent Trump from going wild?

“The business community has concerns that all trade agreements are up for renegotiation, and many countries have said we will work only with people who have the same values as us. It will be interesting to see what flows through from that, will the world play along or stand up for what they believe in.

“There are interesting times ahead.”

“We’re interested in what this means for small businesses. We tend to see more small business activity in times of uncertainty, because business owners don’t wait for government support or other circumstances outside their control to determine their success. Entrepreneurs are just that because they take the reins for themselves and drive their own destiny, regardless of what’s going on around them.”

“As an Australian SME with 60% of our business made up of US exports we are watching the fallout from the US election closely. The Australian-US free trade agreement is now 10 years old and benefiting both sides so we feel fairly confident in this regard, but with Trump touting lines of a 45% tariffs on Chinese imports it’s hard to know exactly where we stand.

“Now it’s just a waiting game where we all start to learn exactly which parts of Trump’s campaign rhetoric will actually flow on to became policy and what was just slogans to grab votes. It wouldn’t be the first time a politician doesn’t deliver on campaign promises, but with the Republicans controlling both houses of Congress who knows?”

“The transition to a Trump presidency, like Brexit, reflects democracy in action. Above and beyond the individual issues and the individuals, the powerful message is that democracy allows societies to adapt, to do the unexpected and for the unconventional to occur. This is the resilience of our democratic system – in giving a forum for the people to truly speak they allow for change and if this change does not work then it will in turn be changed.”

Zoe: “I think we are going to see more instability off the back of this US election. With consumer sentiment down, things will become tougher in real estate with even fewer people choosing to put their property on the market. This is going to mean in our industry, only the most innovative companies will be growing. It’s also a good opportunity for Australian companies to poach staff from Silicon Valley.”

Marta: “Global markets’ initial reaction to Trump’s election is a signal of potential global instability and lack of investors confidence which may have repercussions across all economies. On the other hand investor may seek refuge elsewhere: both for their funds and literally physical immigration, so Australian real estate could see a new push of American and international money poured into the country”

“Fifty Acres is in the PR and communications business and what has hit home to us this morning is how successful the Trump campaign was at speaking in a simple and straightforward way – and it clearly worked.

“So as small businesses I think one of the key lessons is that we should all ask ourselves who are our customers, what are we trying to say to them and how do we want them to act or what do we want them to do? Then examine our marketing and communications and see if it’s hitting the mark – are we talking to our “tribe” or to our customers in a way that will reach them and will motivate them to do something?

“And importantly, we need to speak to our “tribe” on the right platforms and in the most appropriate language. If you can tick all those boxes then you’re on the right track!”

“The world is in a position of huge uncertainty right now following the Trump triumph yesterday. This has already had a material impact on global markets, it will impact trade between countries and many people will lose as a result.

“Fortunately Australia has large amounts of capital ready to be deployed in the early stage private funding space with almost $2 billion dollars of capital raised by VCs in just the last 18 months.

“With the certainty of public markets under scrutiny at this delicate time and growing strength of the private company funding space, there will be a shift in focus to alternative assets – this will only be beneficial to the early stage funding space in Australia and New Zealand.”

“There are two points I would make here:

“Firstly, while it is disappointing that a person with that level of power is anti-renewables, the constant change in regulatory landscape is something the industry should be used to and more recently resilient to. Solar PV in particular, is starting to operate at reasonable scale and its price competitiveness in a lot of OECD countries is strong against black energy sources. Trump or no Trump, companies in the sector have always had to and must continue to focus on lowering implementation costs and therefore delivering the LCOE (leveraged cost of energy) possible.

“Secondly, the environmental imperatives that have driven the policies that Trump is against are in fact bigger than Trump. Mother nature and the consequences of inaction in this case are more powerful that the most powerful person in the world.”

“The election of Donald Trump to the US Presidency represents a range of upside and downside risks for Australian business.

“If we get the shrewd, commercially savvy successful businessman Trump in the Oval Office, it could well be a positive set of outcomes for Australian business. He would be likely to move even closer to long term allies (such as the UK, Australia etc), US economic productivity should improve significantly and trade would be only positively impacted.

“Alternatively, if the protectionist, populist and undisciplined Trump arrives, we might be looking at large tariffs on Chinese imports into the US and an upheaval [of] trade agreements with Asia and beyond. This would be concerning for any Australian business, given our significant reliance on Asia on export of raw materials and professional services.

“Which Trump we get should be evident within months of him taking office, perhaps even before. May we all hope for the savvy businessman with a view to growth. I’m somewhat optimistic.”