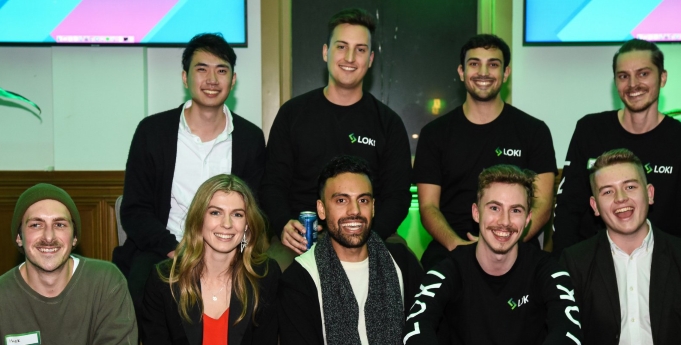 The startup has aims to produce a full suite of privacy tools on the blockchain, such as onion routing and private messaging, which uses decentralised protocols to eliminate the majority of metadata associated with messaging.

“The problem with things like Signal, although it uses end-to-end encryption which is great, is there’s a lot of metadata still associated with it like phone numbers, and it uses a centralised server which users are required to trust,” Loki co-founder Simon Harman tells StartupSmart.

“We’ve created private messaging regulated by the blockchain, which provides a privacy element and greater levels of security that otherwise wouldn’t be possible.”

Like many other blockchain projects, users of Loki are incentivised to use the platform by being rewarded in the company’s own cryptocurrency, known as the LOKI token.

The startup sold about $9 million of these tokens in an ICO early last year, and after staring down the barrel of the tax implications of such a significant raise, the founders started to look to ways to minimise their liabilities wherever possible.

“When we started the company, we were very cognizant of the fact that if we did raise a large amount in one go, with how Australia treats cryptocurrency from a tax point of view, we’d be facing quite a large tax bill,” Harman says.

Australia, like many other countries, treats cryptocurrency as a property and as an asset, meaning the coins are subject to capital gains tax (CGT) and can fall under income tax brackets. When a significant amount of money is raised and converted from crypto to Australian dollars, founders can face tax bills in the millions.

“We wanted to spend as much of that money as possible developing our product, so we looked into how we could optimise our situation more, so we’d have more money and pay less of it to the government,” he said.

“We explored a number of offshore options, but in the end, we realised that the mission of Loki was quite clearly oriented towards advancing privacy for human rights and educational reasons.”

It was on this basis the company applied to be considered a charity with the Australian Charities and Not-for-profits Commission, something Harman says was an easier process than he expected.

The founder explains the commission has a clear set of requirements and stipulations companies have to comply with, but as long as a company can comply and also justify why they believe their mission aligns with a charitable purpose, it’s not overly difficult to be accepted.

However, he does warn the stipulations aren’t for everyone, and in some cases can quite significantly limit what a startup can do.

“You need a constitution which meets the government’s requirements, which means you can’t have shareholders, you can’t share profits, and you need to have a membership base which votes on who the directors are and the direction of the organisation,” he says.

Along with a huge slew of other responsibilities and requirements, Harman says charity status is also unsuitable for many startups due to charities being unable to dole out equity, though he says the company is not “strictly” limited from capital raising as there are methods to convert the organisation back into an equity company at a later stage.

While he acknowledges startups are unlikely to rush out and become charities in droves, Harman does believe it’s something more founders should at least look into.

“I definitely think it’s something people should look at early on in the process, but I don’t think it will become more common. Most companies don’t want to take the equity capital option off the table, so I’m not sure if it will be super popular any time soon,” he says.

In terms of future funding, the Loki team still have healthy runway from their 2018 ICO, and will also start to draw a small cut from the rewards process embedded in their blockchain protocol.

With charity status under their belt, the company is doubling down on development, and Harman predicts the startup will have its products in the market by the end of the year.

“This week we’re spinning up the first integration test on our Loki testnet, and we’re rolling out beta tests over the next three months. We’re aiming for a full product launch towards the end of the year across all operating systems,” he says.

“Once that comes to bear, we’ll be changing from a full product mindset to a full go-to-market strategy.”

NOW READ: Is Bitcoin back? Cryptocurrency rallies more than 20%, but no one seems to know why

NOW READ: Weathering the crypto winter: Liven raises $14 million and opens sale to the public (but don’t call it an ICO)

Interesting concept, I guess sports stars and celebrities have been doing it successfully for many years. You’d need the charitable entity to fund equity options for you such as pay rent on an asset you own.