“A household name”: Canva valued at $3.6 billion after $100 million funding round

Aussie design startup Canva has completed a fresh $US70 million ($101 million) funding round, valuing the company at $US2.5 billion ($3.6 billion) and cementing it as one of Australia’s most valuable and successful startups.

The funding comes predominantly from two new investors, General Catalyst and Bond, with the latter being a brand new fund created by prominent investor and analyst Mary Meeker. Canva is Bond’s first-ever investment, and the fund joined existing investors Felicis Capital and Blackbird Ventures in the round.

With a whopping valuation of $3.6 billion, Canva’s growth has continued to be astronomical. Just over a year ago, the company raised a smaller, $US40 million round, which marked the first time the startup’s valuation tipped over the billion-dollar milestone.

The announcement also comes just days after the company revealed it had acquired free stock photography companies Pexels and Pixabay for an undisclosed sum.

Speaking to StartupSmart, Canva co-founder Melanie Perkins says the new funds the startup has managed to get on board are “amazing”, and says Canva is thrilled to have them alongside long-time supporters such as Blackbird and Felicis.

With a fresh $70 million in the bank and a profitable business, Perkins says Canva will be primarily using the funds to help grow global awareness of Canva’s products, pointing to schools and Fortune 500 companies as potential areas for growth.

“One of our goals is for Canva to become a household name, so we’re looking to really work on that and get more people using Canva every single day,” she says.

“We’ve also seen an incredible amount of interest for Canva for Enterprise since we launched it, and we have 80% of Fortune 500 companies using it, but we want to reach it further into every single organisation.”

“We’re raising this round to get into every workplace across the globe.”

Perkins is in New York doing a round of media to announce the new funding, and was in Paris last week to announce the Pexels and Pixabay acquisitions. However, the founder says there are no plans to move Canva headquarters abroad, saying with the company recently moving into a new office in Sydney’s Surry Hills, the goal is to stay put.

IPO still a no

With the company’s valuation hitting new highs, questions have been raised in recent times about the prospect of a Canva IPO, possibly on an international exchange such as the NYSE.

However, Perkins said the fresh round was in no way a ‘pre-IPO’ round and said a listing was “not top of mind” for the company at the moment and that “many things” could happen before any potential float.

Perkins’ regular pitch for the future of Canva is for it to do the most good it can, and be one of the world’s most valuable companies. There also seems to be no end to how valuable Canva could become, with co-founder Cliff Obrecht telling StartupSmart one trillion dollars was an eventual goal, a valuation just three companies have ever achieved. 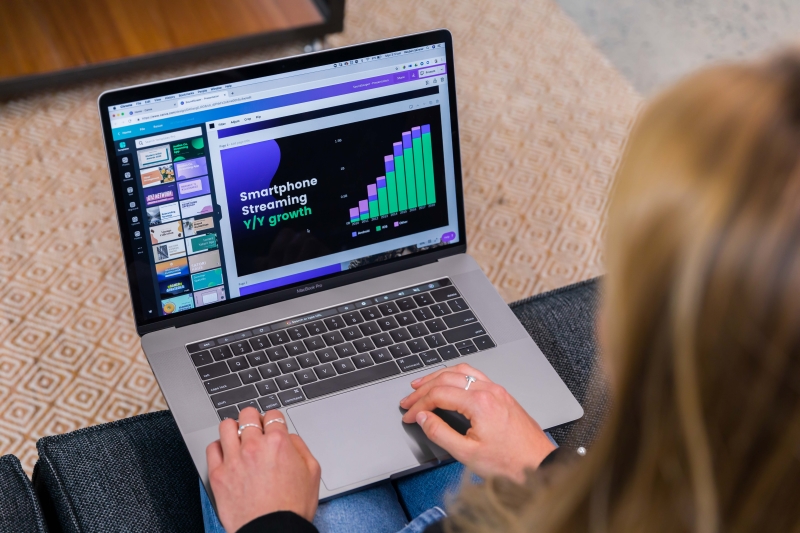 When asked about the level of adoption she’d like to see for Canva, Perkins says Microsoft Office is a “pretty good baseline”, and says the company’s cashflow positive status means it’s capable of making more meaningful and long-term investments in growing different parts of its business.

“When you look at what Canva’s trying to do, and when you look at how design is done currently, with people using all this different software and tools to make one flyer or website, we’re trying to combine it all into one and create design and branding everyone has access to,” she says.

“These things are huge industries.”

No pressure for founders

Canva’s workforce is just about to tip over the 600 mark, and the company still forecasts a doubling of staff each year, meaning it will likely have more than 1,000 employees on its payroll by 2020.

Hiring so much talent in Australia may seem unfathomable for some other founders, with startups regularly lamenting the shallow talent pool in Australia’s tech industry.

But that’s no issue for Canva, however, with Perkins saying the company has been “incredibly impressed” with its ability to attract top talent.

“We had over 1,100 applicants for our intern and graduate programs, and we’ve been lucky to attract talent from all sorts of incredible companies, from both Australia and Silicon Valley,” she says.

With two new big-name investors, along with 400 more staff set to come on board, pressure on Canva’s founding team to get it right might seem immense. However, Perkins says it’s mostly just business as usual.

“It’s funny, I always seem to put more pressure on myself than any external pressure. I’ve always had a very internal resolve, and I always try to better my best,” she says.

“Ironically, I don’t actually think this is more pressure, it feels almost the same, just with more responsibility.”

NOW READ: Why one of Canva’s “ambitious” goals is to be a trillion-dollar company