Four years after selling CarAdvice.com.au to Nine for $60 million, serial entrepreneur Alborz Fallah is at it again.

Now, he’s closed a $3 million pre-Series A round, from a group of private investors and family offices, to get his new startup CarExpert.com.au off the ground.

With many of his old teammates onboard, including Fallah’s co-founders Anthony Crawford and Paul Maric, CarExpert operates in much the same space as CarAdvice. But, Fallah says it’s something of a different animal.

It’s a publication focused on automotive news and reviews. But, rather than being fuelled by ad revenue, it directs readers to links where they can explore further, request a brochure, or visit dealers for that vehicle.

“It seems like a really basic idea, but the click-through rate is astronomical,” Fallah tells SmartCompany.

“The advertising around the content took away from the trust,” he explains.

“What we have is the ability for car buyers to continue the journey they’re on.”

While Fallah doesn’t disclose any specific revenue figures or growth stats, he does hint that his new venture is growing fast.

CarExpert launched in April, he says.

“This calendar year, our revenue will be more than what it would have been in year five at CarAdvice … It is pretty extraordinary.”

To be fair, he’s working with a seasoned team. Having built CarAdvice over 13 years, Fallah sold the business to Nine for a whopping $60 million.

He remained with Nine for a few years, before leaving in 2019 to start working on his new business. And 10 or 11 of his former employees came with him, he says.

They included former CarAdvice executive Andrew Dalton, who is now heading up CarExpert as chief.

“We did shortcut a lot — we knew exactly what we were doing.”

Fallah is also tight-lipped about what this funding will be directed towards, specifically.

“We’ve got a big product launch early next year,” he teases.

He also hints that this will ultimately be a “multi-purpose” business.

“The funding is really to fund that expansion, and to launch that second stage of our business.”

Beyond that, the founder simply says he and the team will be “going hard” over the next year or so.

“Next year is going to be huge for us — that’s what our focus is on now,” he says.

“We’re going to be a lot more than a website,” he adds.

“You’re going to hear a lot more about us.” 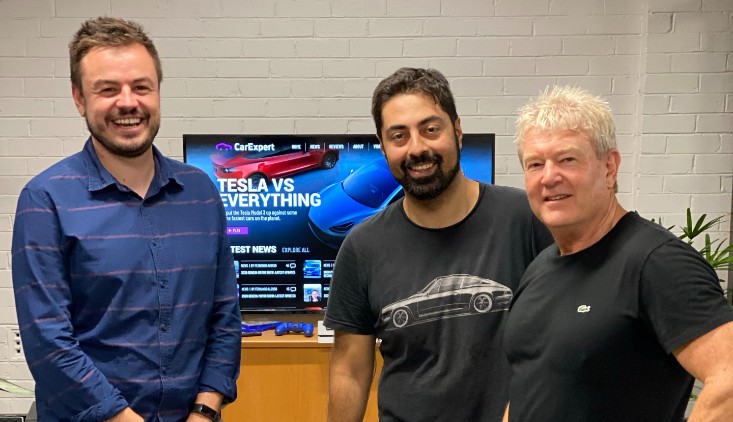 While a $60 million exit would typically be considered a roaring success, when it comes to CarAdvice, Fallah has just a touch of regret about the way things went down.

He very nearly took the business to IPO, he recalls.

“We came extremely close,” he says.

“At one stage we were weeks away … we even had our ASX code.”

In the end, he considered the acquisition to be a safer option for the business and its shareholders. But, now he’s not sure it was the most lucrative one.

“In retrospect, I personally believe that the better option would have probably been to list the company,” he says.

“I think we would have had a higher valuation down the line.”

That said, this founder is not one to dwell on the past.

“We got a lot of lessons from that experience. We go again,” he says.

This time around, an IPO is something Fallah would potentially consider. But, it’s early days, and too soon to know what’s right for this new venture.

“We’re not looking at the business in that manner,” he says.

The best businesses are not built with an exit in mind, he notes. They’re built to solve a problem or fill a gap in the market.

“Once we’re successful and profitable, then we’ll start looking at those options.”

An entrepreneur at heart

All of this comes just a week after Nine announced it will be retiring the CarAdvice brand in 2021, as it relaunches Drive as a platform combining the two.

Nine inherited Drive in the Nine-Fairfax merger in 2018.

In a statement, Drive and CarAdvice chief Alex Parsons suggested combining the two publications will make them stronger.

“In a crowded market we are building out a significant and differentiated consumer-focused offering across commentary, comparison and commerce.

“We are not beholden to the past but driven to the future,” he said.

“Where CarAdvice has its own energy, rich enthusiasm and passion and deep knowledge across the industry, Drive is grounded in its 25-year heritage as an authoritative, familiar and broad auto brand in the minds of Australians,” Parsons added.

“The commonality is that both are seen as highly influential and trusted by car buyers. We want to materially develop those strengths and provide a world-class offering to consumers.”

But, from a business perspective, Fallah sees this as a boost.

“It’s the biggest leg up we could have been given,” he says.

“As a competitor, it gives us a huge advantage.”

But, on a personal level, there’s a twinge of sadness there.

“I’m a bit nostalgic about stuff like that,” he says.

If you’ve built something physical, you can point to that and show it off for the next 100 years, he says. When you’ve built a business — especially an online business — that’s not the case.

“Soon there will be nothing left.”

But, at the same time, Fallah says a business is all about the people. As far as he’s concerned, he has the best people on board.

And, he doesn’t feel life in a large organisation suited him all that well either.

“I’m a terrible employee,” he admits.

“I’ve always been an entrepreneur at heart. I’ve always got to work for myself — I didn’t really belong in corporate culture.”

‘Not covered by advertising’, yet It Is littered with links claimed as revenue. This is the advertising, particularly given only certain manufacturers are paying for it and not others. Though in this IMPLEMENTATION it is deceitful and The problem Is that this Raises questions over authenticity and bias.

The reAson Is siMple too: click through rate, which is easy to manipulate or run as Bulk referal trafFic, won’t turn into customers. Its hard to see the value of enthusiast traffic vs the conventional media reach to in-market buyers, and authenticity of disclaiming advertising rather than hiding it in links.

I’d also suggest that claim of revenue couLd be misleading if its only seed money. Have heard many interesting stories of what happened in the past through industry clients.