Founded in 2016 as a way to combat social isolation within elderly demographics, Conpago offers tablet-based software that bridges the gap between older generations and modern technology.

The “Conpago Companion” tablet has the core features of a smartphone, optimised in a way that’s intuitive for elderly people to operate. Aged care providers can use the tablet to remotely upload images, share moments and foster conversations to raise morale in aged care facilities.

“We’re passionate about empowering the elderly to be able to digitally engage with their family and community in the ways that the rest of us take for granted,” Conpago co-founder and chief executive Marley Brown tells StartupSmart.

Conpago has now partnered with Japanese software company SoftBank Robotics Corp to introduce a friendly face into aged care facilities across the country.

Meet Pepper the robot. As a robotic assistant optimised to engage with people through conversation and a touch screen, Pepper can recognise faces and facial expressions, and is already used in libraries, banks and stores across the world, as well as aged care facilities in Japan. 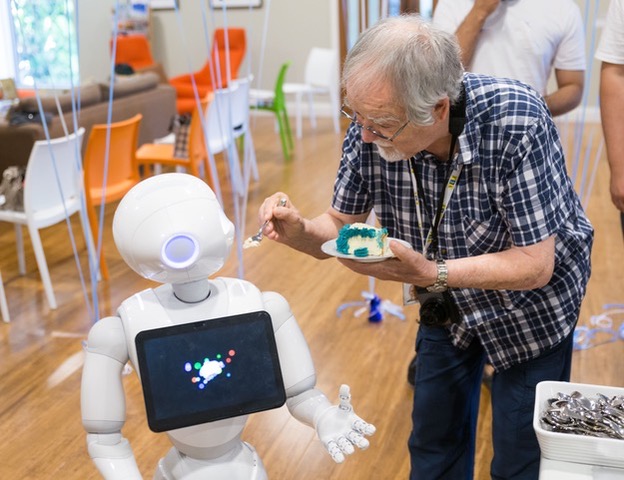 As of October, Pepper has been rolled out to two aged care facilities in south-east Queensland, with another four facility trials lined up in the coming months.

If a fleet of humanoid robots cruising the halls of a nursing home seems more unsettling than reassuring, Brown says aged care residents shouldn’t worry about a robo takeover anytime soon — only a single Pepper will be deployed in each facility.

“We don’t want people to be intimidated by an army of robots, but one robot becomes a focal point,” he explains.

Conpago was born after co-founders Mackenzie Jackson and Marley Brown were inspired by a Queensland University of Technology (QUT) research project where IoT technology was integrated with a kettle to increase the connection between an elderly person and their loved ones. When an elderly person made a cup of tea in the morning, an IoT-connected light would come on in a family member or friend’s kitchen. Similarly, when that person made themselves a cup of tea, the elderly person would see a light and similarly be reminded of their loved ones.

Seeing the potential to connect elderly people with technology, Brown and Jackson created Conpago. In addition to the Conpago Companion tablet, the startup creates IoT devices that can be connected to regular appliances such as a TV or kettle. These devices keep track of when a user switches the appliance on and sends a warning to family and friends after unusual periods of inactivity.

Take advantage of every opportunity

Even though Conpago is only two years old, its founders have immersed themselves in the local startup scene. The startup is currently part of the River City Labs accelerator program, is headed to Sydney later this month for the StartCon $1 million pitch competition, and met SoftBank as part of the QUT bluebox accelerator program. It’s also received hundreds of thousands in grant funding from the Queensland University of Technology as well as Advance Queensland’s Ignite Ideas Fund.

For Brown, taking advantage of the myriad of funding and mentoring programs available to startups in Australia has been invaluable in guiding Conpago through its early stages and establishing connections in the industry.

Yet startups looking to take advantage of the range of startup programs on offer may be overwhelmed by the sheer amount of choice, or discouraged by the lengthy application processes. Brown says the key is patience and persistence.

“It takes a lot of time applying for everything, but the more of these grants and the more events that you apply for the better the systems you develop … it becomes a bit more of a streamlined process,” he says.

“Don’t be too disheartened when you’ve put all this effort into an application and you get rejected — you need to get back on the horse and keep going. Eventually, there’ll be one that’s just the right fit.”