The small carbon victory of shunning taxis and buses in favour of e-scooters is quickly exhausted by trucks circling the city to pick up scooters each day.
But a partnership between an e-scooter provider and eco-friendly ride service in South Australia has been helping to keep the process green from start to finish.

As part of the deal, RIDE scooters and EcoCaddy have developed a battery swapping system that minimises e-scooters’ carbon footprint.

Instead of a truck picking up scooters at the end of each day to move them to in-demand pick-up points or take them back to the depot for recharging, the batteries are swapped out by a roving mechanic on an EcoCaddy pedal-assisted electric bike.

An EcoCargo trailer has also been designed to move scooters around without the use of carbon-producing engines.

The collaboration has worked so well that RIDE scooters and EcoCaddy are set to take their e-scooter and eco-retrieval partnership national.

RIDE CEO Tom Cooper said while the partnership had begun in the South Australian capital Adelaide it was scalable.

He said the companies were looking to expand to Canberra, Melbourne, Perth and Sydney in the coming few months.

Cooper said he also hoped to increase the geo-fence of Adelaide’s scooters, which can only currently be ridden in Adelaide CBD, to include inner-city areas such as North Adelaide and Bowden.

The introduction of e-scooters is among a range of strategies implemented by the City of Adelaide as it works towards its goal of becoming one of the world’s first carbon neutral cities.

Scooters first made an appearance in Adelaide in February when Californian company Lime was selected for a trial. Lime’s permit was not renewed in April. It was replaced by RIDE and Singapore-based company Beam, who’ve been granted permits to deploy e-scooters in Adelaide until October 15. 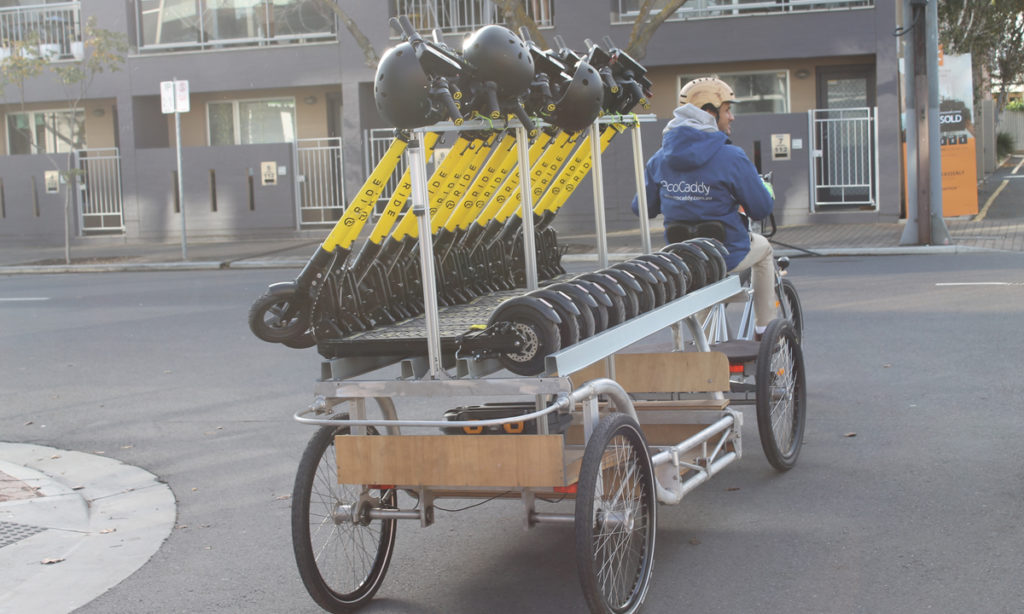 The EcoCargo trailer transports Ride scooters around the Adelaide CBD.

Unlike the other e-scooter companies, RIDE’s vehicles have removable batteries, which can be swapped and charged as required.

RIDE CPO Robert Morrison said the batteries were recharged every few hours to ensure scooters were never being ridden at less than 20 per cent.

When swapping the batteries, rather than using a van or truck, EcoCaddy have created a pedal-assisted electric bike­ – the EcoCart – which can carry more than 80 batteries.

EcoCaddy is a carbon-neutral micro-transit pedicab service that began in Adelaide as a short trip taxi service before diversifying into tours.

The company has a fleet of 22 pedal-assisted electric bikes that provide passenger and delivery services across Adelaide.

“The EcoCart has 1.3 cubic metres of space – or we can fit around 30 cartons of beer in the back – and that is weight included as well,” he said.

The EcoCart is designed as a pedal-assisted electric bike. But, instead of pulling passengers, it has a custom-built aluminium box at the rear.

“When EcoCaddy operates our cargo vehicles we are displacing white vans or utes that would ordinarily do this task. On average, these vehicles emit 220 grams of carbon-dioxide per kilometre,” Langeberg said.

“White vans actually have a really low occupancy rate. About 30 to 40 per cent of the back of a van is actually occupied. So, there is a lot of volume on the road, congesting the road.

“So, if we had a smaller vehicle, built around that capacity of 30 to 40 per cent and it’s not emitting any carbon emissions then we’re actually doing something really great for the city.” 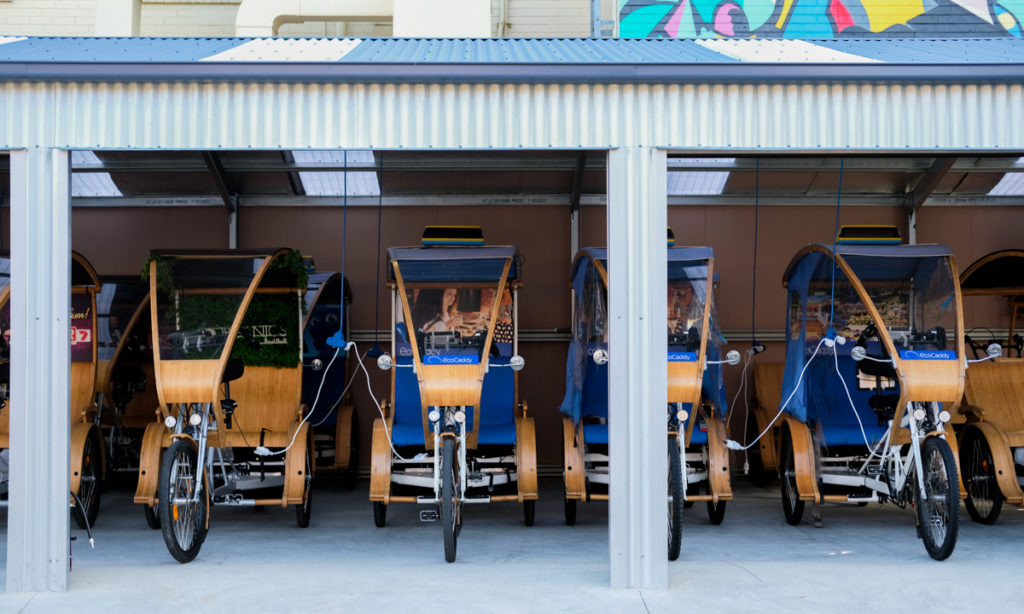 Langeberg said EcoCaddy had been tracking the environmental impact of the cargo vehicles for about six weeks.

In that time, the cargo vehicles have reduced the amount of carbon emissions that would be emitted by a white van or ute by 22kg per day.

Langeberg said if they continued on this trajectory for the next year, the EcoCart could reduce carbon emission by 7.7 tonnes in 12 months.

“And reduce running costs, as our vehicles are human and electric powered and cheaper to maintain than combustion powered vehicles,” he said.

The EcoCaddy has the additional benefit of being able to move through the city as a bike would, allowing the EcoCargo Trailer to pull up right beside scooters.

The EcoCargo Trailer is used to transfer scooters between locations.

It’s similar to EcoCaddy’s other vehicles but the seating has been replaced with a 2.5m flat bed, which can carry between 18 and 20 scooters at once.

“If you’re a person who is looking to use a RIDE scooter, ideally if you’re working in the city, what you would like is for that ride scooter to be where you enter the city or right outside the train station,” Langeberg said.

“And that takes you a kilometre or kilometre and a half, straight to the front door step of your office.

“Most of the time you won’t need it for the rest of the day. So, we’ll pick up that scooter and take it somewhere else, whether that be a café or outside the front of a transport hub, and make sure that it’s parked somewhere safe and neat with a helmet.”

This article first appeared on The Lead.

NOW READ: When life gives you limes: What we can learn from Australia’s first scooter-sharing trial