Elon Musk is launching a Tesla into space, and here’s how SpaceX will do it

By Ben Thornber, University of Sydney

Elon Musk’s SpaceX Falcon Heavy rocket is scheduled for launch on February 6, and the entire space industry is watching with anticipation.

Aiming for first flight of Falcon Heavy on Feb 6 from Apollo launchpad 39A at Cape Kennedy. Easy viewing from the public causeway.

What is so special about this rocket? This vehicle will be the first of its kind, the world’s most powerful launch vehicle and targeting an unprecedented level of reusability. The launch has been delayed on numerous occasions since 2013, but if the mission is a success, we will be one step closer to Musk’s incredibly ambitious aim to launch a manned Mars mission within the next decade.

However, rocket science is famously difficult. As CEO of SpaceX, Musk himself is uncharacteristically reserved, stating:

“I hope it makes it far enough from the pad that it does not cause pad damage. I would consider that a win.”

We will have to wait and see. In typical Musk flair, the first payload will be his Tesla Roadster – which is set to become the world’s fastest car following its launch into a heliocentric orbit.

Rockets capable of carrying a payload over 20 metric tonnes are classified under the Heavy-Lift Launch Vehicle (HLLV) category. The rocket must carry its package up to at least 160km above the surface and achieve an orbit, requiring speeds above 8,000 metres per second.

To put these figures in perspective, the rocket could propel two fully loaded city buses more than 50 times the height of Mount Everest at 32 times the cruising speed of a Boeing 747.

The Falcon Heavy will achieve this by using three rockets, with the first two separating after stage one of the launch. The final rocket will then lift the Tesla Roadster up into space, where it will enter a highly elliptical orbit between the Earth and Mars. Without external interference, Falcon Heavy will remain in this orbit for thousands of years.

Currently, the Delta IV Heavy is the most capable HLLV operational. The most popular HLLV is the European Ariane V, which holds an extensive list of international clients. It is responsible for launching core components of the international space station, as well as launching interplanetary spacecraft, global navigation satellites and orbital telescopes.

According to SpaceX, the Falcon Heavy will lift twice the load at a third the cost of these current systems, placing SpaceX in an excellent position to be the first choice for all heavy lift missions. 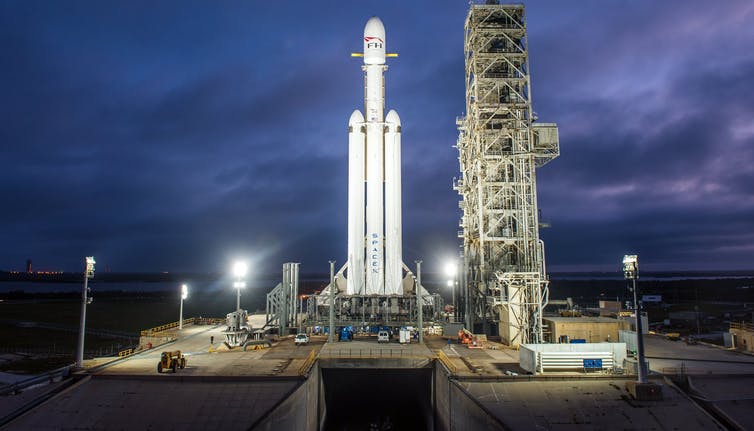 Pioneers of the new space industry

Since the early missions of Sputnik and Apollo, space has generally been a state-run affair. Organisations like NASA, the European Space Agency, Russia’s agency Roscosmos and the Japanese Aerospace Exploration Agency have all been operated and funded by their respective governments.

Private space companies were formed alongside these agencies, capitalising on the success of their missions. However, given the enormous cost of space access, space innovation was always led by the world governments.

In the 21st century, however, things are starting to change. A space agency wasn’t behind the current push for reusable rockets (even though NASA was the first agency to launch one).

SpaceX has led the way in reducing launch costs and improving efficiency. The new space industry is growing rapidly, with companies like SpaceX at the forefront.

Dragon launched this morning and is on its way to @ISS. This is a video of the berthing maneuver from a prior mission.

The ambitions of SpaceX are not going to stop with satellite launches using Falcon Heavy. The rocket has been designed to have acceleration profiles appropriate for manned missions, and SpaceX currently plan 2019 tests of its Dragon2 capsule — and have signed up two unnamed space tourists for an unpowered flight around the moon.

But, will it work?

Rockets have a notorious history of failing on the first few launches. Test campaigns usually run for several years; recently SpaceX engineers had encountered numerous issues before their first successful booster return in 2016.

The added challenge however for SpaceX is ensuring reusability. Each of the Falcon 9 rockets must be ejected during launch and safely returned to Earth. It was only two years ago that it achieved this milestone for the Falcon 9.

The Falcon Heavy is a very ambitious endeavour by SpaceX, and will certainly blaze a trail across the sky in one way or another. And it’s pretty clear that Musk is changing the landscape of the space industry, with lasting effects for decades to follow.