“It meant that I had to be in a dark room and I couldn’t look at my screen or my phone. I just kind of floated around listening to the occasional audiobook for like a month,” Ta’eed says.

“For someone who works and lives online, it was like a massive tech detox.”

It was during this period of darkness that the seeds were sown for Ta’eed’s newest venture — an ethical chocolate business called Hey Tiger. The recently launched business offers an eclectic mix of 16 different chocolate flavours, ethically sourced, and, as Ta’eed proudly says, marketed and targeted at women.

“Women are one of the biggest purchasers of chocolate, but most chocolate companies either target children or older generations, both design-wise and in terms of flavour,” she tells StartupSmart.

Ta’eed had long counted chocolate making as one of her “weird hobbies” unfortunate dinner guests were regularly subjected to, and after becoming an ambassador for the Hunger Project and seeing the realities of child labour in the cocoa industry in places like Burkina Faso, the pieces fell into place and Hey Tiger was formed.

“I realised I’d been working at Envato for nearly my whole adult life. I started there when I was 24, and before that I only had one other real job, aside from one at the local chicken shop,” Ta’eed says.

“I’d been working on Envato for so long, and businesses really shift a lot from when you’re first getting it set up to when there’s 300 people working there. I loved working at Envato, and I was passionate about it, but I was seeking a new challenge.”

Ta’eed had been doing regular speaking engagements, which sated her hunger for new challenges for a time, however, as she got more and more used to them, she was still looking for new ways to challenge herself. But admittedly, she says she was too flat out with her work at Envato to even consider what a new venture would look like.

That was until the eye injury, and just weeks after recovering Ta’eed began her somewhat unorthodox market testing for Hey Tiger.

After working at at Envato all day, Ta’eed would come home and convert the family kitchen into a chocolate creation studio where she would experiment with an array of different flavours. Secretly, she’d then get her executive assistant at Envato to collate test groups of Envato employees, who would taste and give feedback on the flavours without ever knowing it was Ta’eed who made them.

“The feedback I got was really great. That was like my alpha alpha testing, just to see if the idea had legs,” she says.

After establishing that Hey Tiger could walk, Ta’eed scouted out some professional chocolatiers, and got to work testing out “hundreds” of different trial flavours, before boiling it down to a final 22.

“We had to narrow it down to the ones we were really excited about, ones that were different and compelling, or where we took a new angle on a classic flavour. There were easily 50 variations of each bar made until we were really happy with the taste,” she says.

Those flavours include chilli and mint, strawberry and balsamic, and birthday cake crumb. Notably, the trial flavour of ‘blue cheese’ does not appear to have made the final cut.

From tech to chocolate

Hey Tiger now has seven employees, and Ta’eed has stepped down from her operational roles at Envato, although she still sits on the company board. She says Hey Tiger’s launch took four months longer than she would have liked, as she’s come to terms with the stark juxtaposition between running a tech company and one that makes physical goods like chocolate bars.

“It’s been really eye-opening for me. With Envato, we literally put something online and hacked it all together, and figured out how to do it all while we launched. The realities of a physical food product mean I now have a lot of respect for the companies who do this,” she says.’

“We ran into a lot of complexities around sourcing ingredients, nutrition panels, and how long out lead time was. It’s been interesting and fantastic, but I have been surprised by how complex all of it is.”

Envato, which Ta’eed co-founder with her husband Collis Ta’eed and Jun Rung, is a silent achiever of the Australian startup scene, not often rearing its head but regularly posting strong results, such as $37 million in profit during 2016. It is also regularly praised as a fantastic place to work. 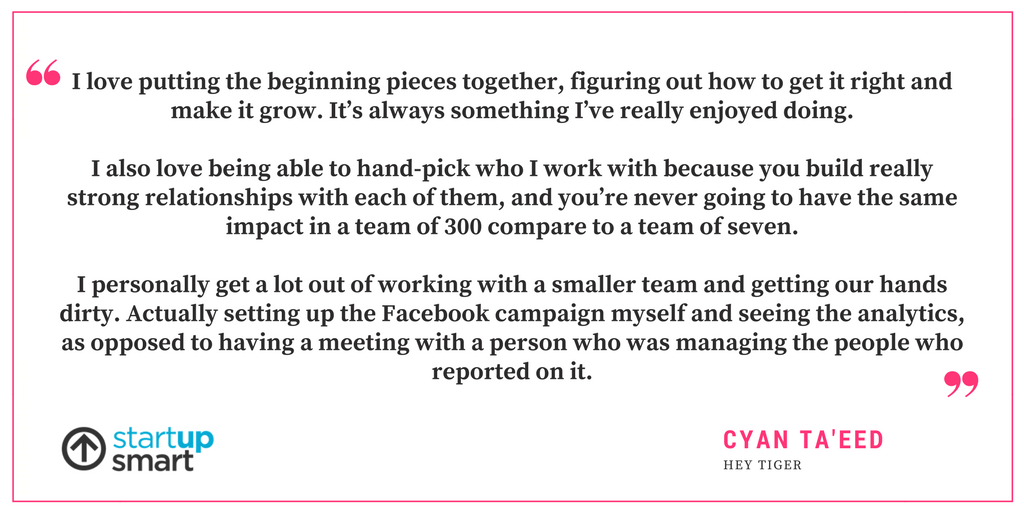 While she says she’ll always be passionate and excited about Envato, Ta’eed views Hey Tiger on a different level to the tech-focused design company. For her, it’s about combining her passions to create something close to her heart, saying it’s “lovely to work on a startup again”.

“I’m in love with the idea of making something and giving it to someone I care about. It’s immensely fulfiling, and I love the fact people get so excited about it,” she says.

“When I would go to conferences and try and explain Envato, if the person wasn’t a designer or developer, their eyes would just glaze over — the company is so specific. It’s much easier to explain what I do now: we’re a chocolate company.”

But Ta’eed admits she’s still adjusting to being involved with Envato just on a board level, laughing that with her husband Collis as the company’s the chief executive, she still does “a lot of talking about Envato”.

Here for the hustle

Right now, Hey Tiger is focused on getting market exposure, with a longer idea of getting into the gifting space. Ta’eed is also planning a series of pop-up stores for the brand, with a more permanent bricks-and-mortar presence a future possibility (“maybe just one store”, she says).

Ta’eed says she has a traditional startup founder’s view on what sucesss looks like for Hey Tiger, wanting to get the company to scale and reach profitability before anything else; future goals can be scary things before Hey Tiger finds its feet in the market, she says. She is happy with how the brand has been received online however, and generally thinks it’s all heading in the right direction.

Reflecting finally on her big switch from tech to chocolate, Ta’eed says it got to a point where she felt like Envato didn’t need her anymore, and her skills as a startup founder could best be used elsewhere.

“I remember suddenly thinking that Envato had gotten to the stage where the executive team were incredibly good at what they do, and they were all specialists in their fields,” she says.

“As it evolved into a larger business there was less need for people will varied skill sets. I just felt like I was much better in that startup hustle phase.” 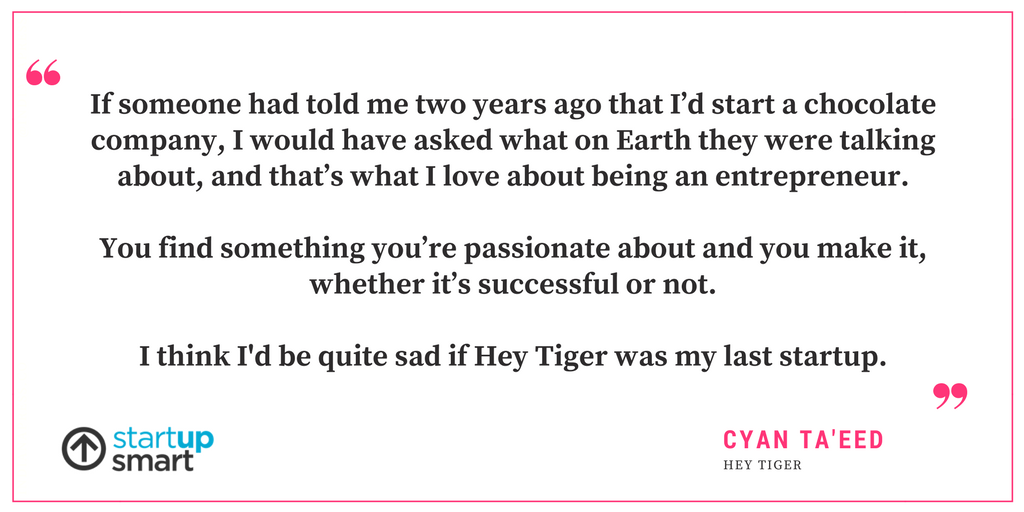 NOW READ: The secrets behind Envato’s success and what the founders would’ve done differently