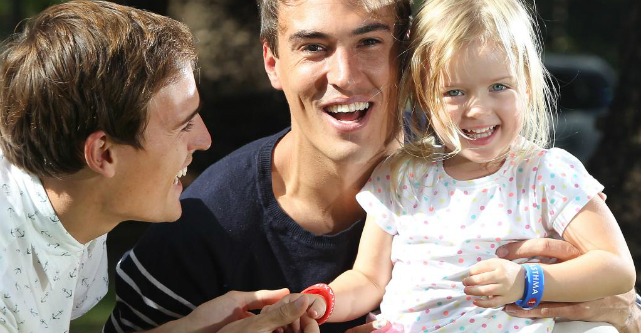 After competing in a Boston startup competition for $3 million in funding and a spot in a major accelerator program, a pair of Sydney twin founders have returned home to conquer the Australian market.

Courtney Dober, a television presenter and former contestant on The Bachelorette, has spent the past four years growing CleverDux with his twin brother and co-founder Jarrad Dober. The startup’s latest product is the See and Save system to help stop preventable deaths and hospitalisation of children with asthma, allergies, anaphylaxis and epilepsy.

In line with this, the brothers are planning to create an app and online dashboard that will keep teachers and carers updated on important triggers like weather conditions and pollen rates, and alert them to which children to pay attention to.

“We used to work in child care and after school care,” Jarrad Dober, a full-time schoolteacher, tells StartupSmart.

“We were seeing a larger rise in kids with asthma and anaphylaxis.”

After the Dobers appeared in a local paper, a mother of a child with asthma who had asked them to implement the See and Save system at her primary school recommended they check out MassChallenge.

“I filled in a form thinking not too much about it and got an email [saying] we’ve been accepted,” says Dober.

“It took me two-and-a-half days to fill out but in answering the questions for the application it brought up a lot of issues [about] the company that we [needed] to address,” says Dober.

The MassChallenge Australia competition, sponsored by various partners including the Government of Industry, Innovation and Science, Microsoft Australia and Jobs for New South Wales, saw 45 startups across Melbourne, Sydney and Adelaide go through a bootcamp of intense training, lectures, mentoring and pitching commencing in November 2016.

After a number of pitches, 10 finalists, including CleverDux, were invited to pitch at MassChallenge’s Boston headquarters in the final round, which ran from March 6-10.

“We weren’t one of their companies but we all have the chance now to move to the next phase.

“Everyone there is changing some aspect of the world.”

Australian finalists like CleverDux can now submit a new online application by March 28 and will have another opportunity to pitch for a spot in MassChallenge’s four-month Boston accelerator.

The Dobers plan to put in an entry but their key focus is cementing a footprint in the Australian market.

“We will go to the market with a very simplified product to see who picks it up and if there is [demand] we will push the go button on the application and dashboard,” says Dober.

“Me and Court [both] have to live at home with mum and dad because we can’t afford to move out and have this company [but] lots of people are saying this is an issue that needs to be sorted out.

“We know this product isn’t just an Australian issue, the same issue is found in New Zealand, the US, UK and in Canada.”

While CleverDux began by selling identifier bracelets to help parents remind children of where they need to be after school, the death of eight-year old Marcus Terranova in 2015 inspired the brothers to take a new direction, says Dober.

Terranova died after suffering from an anaphylactic reaction and getting treatment for asthma instead of an epipen.

“We read that story and thought, ‘God, we’re having this issue here’,” says Dober.

“These things shouldn’t be happening. Almost every single hospitalisation and death due to asthma and anaphylaxis is preventable.

“[We can stop these] as long as we get quick identification and medication to those children in time.”

Pivoting the product and scaling back resources for the original wristband system has seen CleverDux’s sales drop from between $60,000 to 80,000 in the last financial year to about $15,000 to 20,000 this year, says Dober, but it’s well worth it.

“Our whole company has been built on the memory of Marcus and we don’t want any other parents to deal with such deaths,” he says.