Unrest is ongoing all over the US, with protests over the killing of George Floyd turning violent and the police brutality debate continuing to rage.

And as anger and tension runs through the streets, President Donald Trump has sparked a debate in the tech world, too. Divisive comments posted on Facebook and Twitter have highlighted a stark difference in the ways the social media giants approach politics, free speech, violence and censorship — and Facebook’s employees seem to feel they’re on the wrong side.

The discrepancy stems from a troubling, and now infamous, post from Donald Trump on both Twitter and Facebook, in which he suggested protestors could face violent retaliation, saying “when the looting starts, the shooting starts”. 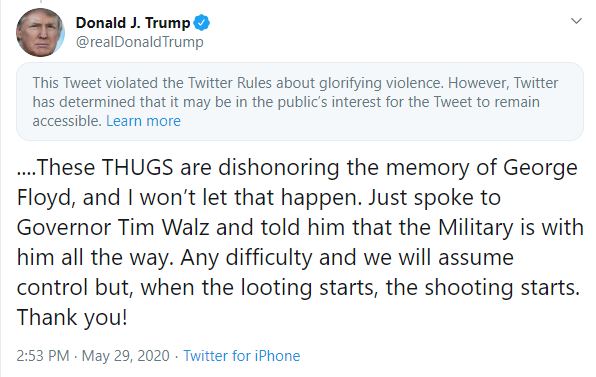 Facebook, however, took the opposite stance, with founder and chief Mark Zuckerburg deeming that a post with the exact same phrasing did not violate its rules.

“Personally, I have a visceral negative reaction to this kind of divisive and inflammatory rhetoric,” he said in a Facebook post of his own.

“But I’m responsible for reacting not just in my personal capacity but as the leader of an institution committed to free expression.”

Zuckerburg’s employees were not on the same page, and staged a virtual walkout on Monday, in protest of the decision.

Some staff members threatened to resign over the lack of action, and there are reportedly petitions circling.

In an employee message board, seen by The New York Times, one employee reportedly wrote: “The hateful rhetoric advocating violence against black demonstrators by the US President does not warrant defense under the guise of freedom of expression”.

The employee called on their boss to “immediately take down the President’s post advocating violence, murder and imminent threat against Black people”.

Needless to say, that did not go down well.

Several staff members have reportedly made good on their threats to abandon ship.

One former software engineer posted on his LinkedIn page that he “cannot stand by Facebook’s continued refusal to act in the president’s bigoted messages aimed at radicalizing the American public”.

“I’m scared for my country,” he added.

Elsewhere, other tech professionals are urging Facebookers to quit, with some saying a small group of employees can make a big impact, and others encouraging them to “use your powers for good”.

However, rather predictably, the call for people to leave their roles in the midst of a pandemic and an economic crisis has also been criticised.

It only took 9 Google workers — the “Group of Nine” — to block federal cloud cert. and kickstart the rejection of Google’s aid to drone warfare. This was the seed for the DoD adopting its own AI Principles.

A small group of workers can collectively have a huge impact. https://t.co/5bpDMNdOpD

Telling people to quit during a pandemic is… an interesting take. Especially when there are freezes and layoffs everywhere.

Just curious, what’s your proposal for health coverage? Will you be helping with that as well?

Reports also claim Zuckerburg has had a phone call with Trump. It’s not clear exactly what the pair chatted about, but Zuckerburg says he made his displeasure clear.

“I used that opportunity to make him know I felt this post was inflammatory and harmful, and let him know where we stood on it,” he reportedly told Facebook employees.

But it’s not only current employees who are disgruntled.

Some 30 early employees of the social media giant have written an open letter calling on Zuckerberg to back-peddle.

The former staff members call his stance a “betrayal” of Facebook’s ideals.

“The Facebook we joined designed products to empower people and policies to protect them,” the letter says.

“The goal was to allow as much expression as possible unless it would explicitly do harm. We disagreed often, but we all understood that keeping people safe was the right thing to do. Now, it seems, that commitment has changed.

We no longer work at Facebook, but we do not disclaim it. We also no longer recognize it.”

Civil rights leaders have also shared a call with Zuckerburg, later releasing a joint statement to express their concern.

The heads of the Leadership Conference on Civil and Human Rights, the NAACP Legal Defense and Educational Fund and Color of Change said in the statement they are “disappointed and stunned by Mark’s incomprehensible explanations for allowing the Trump posts to remain up”, Axios reports.

“He did not demonstrate understanding of historic or modern-day voter suppression and he refuses to acknowledge how Facebook is facilitating Trump’s call for violence against protesters,” the statement said.

“Mark is setting a very dangerous precedent for other voices who would say similar harmful things on Facebook.”

The role of social media platforms in political discourse has been under scrutiny since the Cambridge Analytica scandal came to light. And, while Facebook has said it is working to combat the sharing of ‘fake news’, Zuckerburg has stressed he will not fact-check posts from politicians, saying he doesn’t want the company to be an ‘arbiter of truth’.

This saga feels like a turning point in the narrative. We now know squarely where the world’s two most influential social media CEOs stand, and it’s very possible things may get uglier yet.

This article was updated at 11.45am on Thursday, 4 June, 2020 to include a reference to the open letter from early Facebook employees.

NOW READ: Australia vs Facebook: Why the privacy watchdog is right to be taking on the tech giant

NOW READ: Aussie startup Stackla is taking Facebook to court: Is this a cautionary tale of over-reliance?