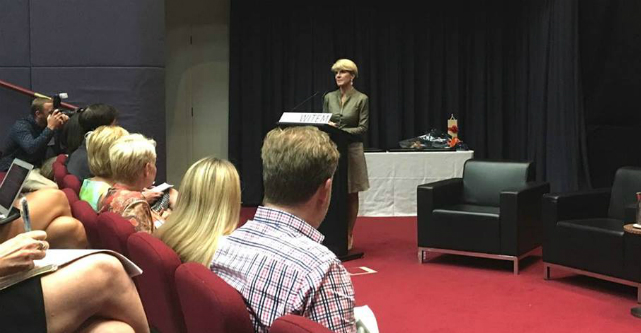 “Singapore’s attractiveness for Australian startups is underpinned by its dynamic venture capital and investment community, and its reputation as one of Asia’s leading research and development centres.

“With more than 3500 multinational companies headquartered in Singapore, the landing pad will give Australian entrepreneurs access to a network of contacts and opportunities, providing a gateway to more than 600 million consumers across Southeast Asia.”

Singapore is one of five landing pads being established by the federal government, with the first cohort of startups settling into San Francisco in September last year. The other landing pads are located in Berlin, Tel Aviv and Shanghai.

Startups interested in participating in the $11 million landing pad program must apply through Austrade.

Four Australian companies are already operating from the Singapore landing pad — hipflask, ebilities, Quitch and Zed — and Bishop said in a statement the government “hope[s] that in the next round we’ll be able to increase that number hopefully to about ten.”

“Completing the application only took an hour, and required us to include the background on our business, what stage our business was at in it’s growth cycle and our aim for securing a position at the landing pad,” Merriman said.

The opportunity for Australian startups in Singapore

Singapore’s startup sector is one of the fastest growing ones in the world, with total funding raised exceeding $US1.16 billion ($1.53 billion) in 2015, and e-commerce, logistics and transportation, and marketplaces among some of the “hottest verticals”, according to Tech in Asia.

Meanwhile, OddUp revealed in its Sydney Startup Ecosystem Report 2016 that startups raising capital look to overseas investors predominantly from Singapore and the US.

It also placed Singapore as the third largest startup hub in the Asia Pacific region, after Beijing and Shanghai, for the number of startups it has.

Former Facebook executive Nicki Kenyon, who is a board director at Sydney startup Shootsta and helping it set up operations in Singapore, told StartupSmart the growth in the Singapore startup over the past two years has been “dramatic”.

“[Singapore] is an incredibly diverse and dynamic region. I live here and I feel it and I see it every single day.”

With Singapore being a magnet for high-growth ventures from neighbouring nations like India, Malaysia and China, Shootsta chief executive Mike Pritchett describes it as a “very big place to start” for Australian founders wanting to break into Asia.

“It feels like when you’re in Singapore, the government roll out the red carpet for you and introduce you to everyone,” Pritchett tells StartupSmart.

Pritchett says Singapore’s government operate initiatives like the Economic Development Board, which aims to connect startups with key aids like account managers to assist in doing business there.

“They want to look after you and help you grow business, whereas strangely enough in Australia … you feel like you’re left out in the back,” says Pritchett.

For startups serious about expanding into Asia through Singapore, Pritchett says founders will need to go the extra mile.

“The Singaporean startup scene is very much about relationships and being over there is very important,” he says.

“Just because there’s a landing pad-type arrangement [and] there are actually quite a few … it still takes an individual to run that and to be there and the business owner [needs to] really step up.

“Don’t think you can just sit in a startup hub run by an Australian government and you can suddenly work there.”