From doctors to journalists: Here are the five jobs robots may take first 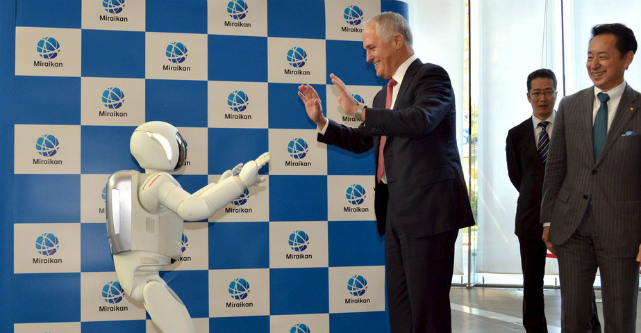 The job of a business owner is irreplaceable, and it’s unlikely we’ll see the rise of entrepreneur robots anytime soon. However, one expert believes there’s a number of other jobs that robot workers are likely to dominate in years to come.

While the word “robot” might have minds jumping to humanoid objects full of metal and wires, Palmer says he defines robots to include “machine learning algorithms running on purpose-built computer platforms”.

“If your main job function is taking a number from one box in Excel and putting it in another box in Excel and writing a narrative about how the number got from place to place, robots are knocking at your door,” Palmer writes.

This is in line with what futurist Martin Ford told SmartCompany last year, when he noted that jobs that involve sitting in front of a screen are vulnerable to the rise of robot workers.

“If someone else could do your job from watching you do it, there is potential for disruption,” Ford said at the time.

Palmer believes when it comes to jobs that involve selling products according to basic details like “specifications, price and availability”, intelligent AI could probably do it better.

“Unless you sell dreams or magic or negotiate using special perks, bribes or other valuable add-ons that have nothing to do with specifications, price and availability, start thinking about your next gig,” he says.

“Machines can take so much cost out of any sales process (request for proposal, quotation, order and fulfilment system), it is the fiduciary responsibility of your CEO and the board to hire robots.”

Palmer claims robots could start to take the jobs of financial and sports reporters, as well with commentators and announcers.

“Machines can be taught to read data, pattern match images or video, or analyze almost any kind of research materials and create a very readable (or announceable) writing,” he says.

“Text-to-speech systems are evolving so quickly and sound so realistic, I expect both play-by-play and color commentators to be put out of work relatively soon.”

Palmer believes the robo-alternatives will be “so much better” than their human counterparts.

Rather than hiring someone to do your business’ taxes come the EOFY, SMEs could just plug their data into a program, and have it all done for them, he says.

“Robo-accounting is in its infancy, but it’s awesome at dealing with accounts payable and receivable, inventory control, auditing and several other accounting functions that humans used to be needed to do.”

“According to Memorial Sloan Kettering Cancer Center, IBM’s Watson is teaming up with a dozen US hospitals to offer advice on the best treatments for a range of cancer, and also helping to spot early-stage skin cancers,” Palmer says.

“And ultra-precise robo-surgeons are currently used for everything from knee replacement surgery to vision correction.”

So how many of your workers could vulnerable to being replaced to robots, and what can you do about it? One UK-based insurance firm took an upfront approach recently, allowing staff to retain their position if they admitted their job could be done better via automation.