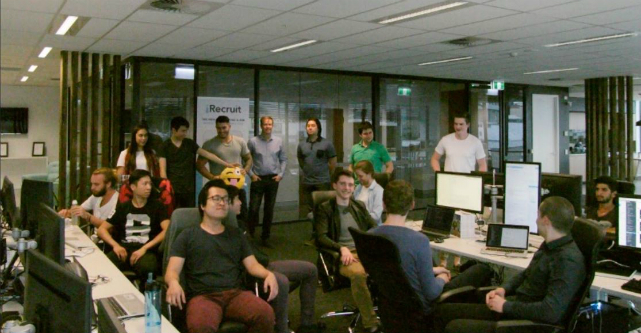 Brisbane-founded recruitment startup iRecruit made its Shark Tank debut on Tuesday night, but a lot has happened at the company since the television episode was filmed last year.

IRecruit attracted $500,000 in pre-launch seed funding in August 2016, but by the time Tuesday’s Shark Tank episode went to air, both of the company’s co-founders had stepped down from their roles and the startup had been placed in liquidation.

The startup was billed as a cloud-based platform for job seekers and employers, which would use behavioural science to match these groups together.

Co-founders Todd Pierce and Aleksandar Svetski bootstrapped the platform with $100,000 and then secured external funding from angel investors in August last year.

However, within months, iRecruit Australia Pty Ltd was placed into voluntary administration, with SV Partners appointed to manage the company.

In early May, a decision was made to wind-up the business and place it in liquidation, according to a notice lodged with the Australian Securities and Investments Commission.

SV Partners has told StartupSmart investigations into the company are still underway, and the liquidators are working to realise a number of assets, including the company’s partly developed software and bank accounts.

The scale of the liabilities are still to be confirmed but they amount to less than $100,000.

IRecruit was one of the first businesses to pitch to the sharks in the season three premiere of Network Ten’s reality show for entrepreneurs, with Svetski asking the judges for an investment of $200,000 in exchange for 2.2% of the company. The pitch was based on a lofty company valuation of $9,090,909.09.

The episode was filmed before the end of December and unsurprisingly, none of the sharks were interested.

Reflecting on the decision to appear on the show, Svetski tells StartupSmart he “realised it was more entertainment value than anything serious”.

“It was all very staged,” he says.

Pierce tells StartupSmart watching the episode back was “absolutely hilarious” and that it was easy to “tell there was a lot taken out of context.”

After taping the episode, Pierce recalled saying to Svetski: “‘They’re going to have a field day with this’.”

Svetski admits his appearance on the show was targeted at driving exposure, rather than seeking actual investment for iRecruit.

“It was more of a publicity thing than anything else — we’d already raised all the money we needed,” Svetski says.

Both Svetski and Pierce stepped down from the company they founded before the Shark Tank episode was broadcast and StartupSmart understands up to 19 other staff members also left the business during this time.

Svetski cites differences between he and the board regarding the future direction of iRecruit as the reason for leaving the company in February of this year.

“The board of directors we had on at iRecruit wanted to corporatise [the company] and I wanted to keep it in a startup ethos,” Svetski tells StartupSmart.

Pierce notes: “At the end of the day business is business, but if you don’t have that long term vision how are you going to pull through?”

Justin Falk is the founder and managing director of Talentvine, a Brisbane-based talent acquisition company operating in the recruitment industry. He says despite iRecruit’s insolvency, there is still “huge potential for disruption” in the recruitment sector, which is “still seeing tremendous growth”.

“What we have seen in the recruitment and HR tech space is a lot of money being thrown towards a number of projects,” Falk says.

“The fact that there are these companies that are able to raise this amount of money shows the magnitude of the disruption available in this space — when that person does get it right its going to be huge,” he says.

Both Svetski and Pierce have now co-founded a new Brisbane venture — Valley Iconic — that they say will be “combining the experience” they’ve gained over the years in the startup ecosystem.

“We are taking the old iRecruit office and turning it into a hub for startups to get involved,” Svetski says of the co-working space.

Pierce even sees old iRecruit staff members come and work from the hub, which is based in Brisbane’s Fortitude Valley.

“Everything happens for a reason,” he says.

I’ve got exactly the same thing looking for partners. I certainly don’t value it at 9m! Dvivide that by 20 and you’d be around the mark. And we’re not charlatans like that guy.
Anyone interested be happy to hear from you!
goworkmatch.com.au

lots of “lorem ipsum” text on the site… you are very early!! good luck

Too late – the horse has bolted.

Disruption is always proportional to the quality of execution, whatever happened to the idea of starting small and growing incrementally?

Now Aleksandar and Todd are running Valley Iconic. They are trying to pitch their business to America. Very very dodgy

So is Shark Tank a laugh?

These guys are scam artists. I’ve been working around these guys in similar industries for 8 years now. I probably wouldn’t write this normally, but the arrogance of these 2 individuals, makes it easy to call them out. Scams have ranged from a frozen yoghurt franchise, to irecruit and probably this next “venture”. Everyone who has been in business with these guys (staff, suppliers, franchisees) have been royally fucked over. Bad dudes…keep your money away from these guys.