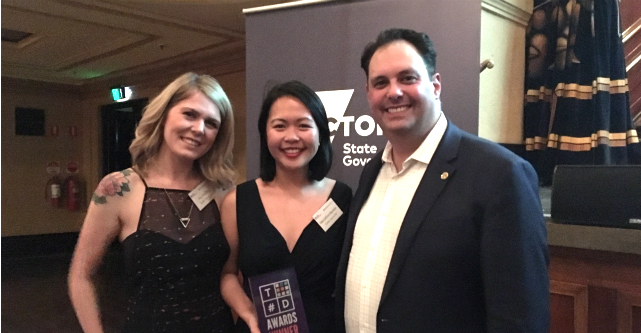 Entrepreneur and founders aiming to improve the diversity of the Australian tech sector have been recognised in a new series of awards run by the Victorian government.

The title is one in a series of new awards introduced by Victoria’s innovation minister Philip Dalidakis to recognise and celebrate people working actively to improve gender and cultural diversity in the local tech sector.

Code Like a Girl, founded by developer Ally Watson, runs events, workshops and support projects to increase the number of women in digital leadership roles.

Watson says the winning the award was completely unexpected.

“As a grassroots initiative, we do all this work in our spare time, on nights and weekends,” Watson tells StartupSmart.

“We were shocked, surprised and overwhelmed to say the least. It really means a lot.”

This year marks Tech Diversity’s second anniversary, and it continues to put a spotlight on the problem of a lack of diversity in the tech sector.

Speaking at the event, Dalidakis said more needs to be done given women represent under 20% of Australia’s digital tech sector, only 14% of tech graduates are women and 30% will leave the field within 15 years of service.

Dalidakis adds that the state Labor Government has taken measurable steps to ensure all its government boards are made up of at least 50% women, while its innovation expert body LaunchVic is the first of its kind in the country to appoint more women than men.

Speaking at the event, Dalidakis said the efforts of those shortlisted for Tech Diversity awards and the winners themselves were a testament to Victoria’s rich digital workforce.

“The quality of the shortlists, let alone the winners, prove that gender and culturally diverse teams really do give you the best chance of being great,” Dalidakis said.

“Victoria’s tech industry is leading the country in attracting major global tech leaders to base here and generating revenues of more than $34 million annually for the economy but there is no doubt, we need more diversity – it is what will make our industry great.”

Since its launch in 2015, Code Like a Girl has run nearly 10 events on virtual reality through to gaming, and is now planning to launch a series of coding workshops for female students in Year 1 to 12.

The initiative will be supported by Envato, Touchcorp Limited and DiUS.

“We’re really hoping that we’re going to encourage these young girls to consider a career in coding,” Watson says.

“It’s something I’ve wanted to do for a long time.”

Code Like a Girl is now looking to expand nationwide and plans are underway for its first year anniversary.

“We’d like to celebrate with a party dedicated to sisterhood and tech, and collaboration of communities and industries,” she says.

More than 10 leaders from education and government through to business and advertising were recognised at this year’s Tech Diversity Gala.

Among them was Avanade for its projects ‘Proudly supporting LGBTI at Avanade’ and ‘Realising results through diversity and inclusion initiatives’.

Watson says that events like this are crucial for promoting the sector and recognising those that are carving the way forward.

“The Tech Diversity Gala is really great because it recognises the initiatives [and people] that are working hard in the tech space,” she says.

“It’s really good encouragement and it sets the standard.”