For Cardly co-founder Patrick Gaskin, the unassuming industry of greeting cards is a gold mine of opportunity.

It’s not just the potential $17 billion market across the US, UK, and Australia, he says. It’s also the growing desire from individuals and businesses to return to more personal forms of correspondence, without the hassle.

“People want to show they care, and express themselves in a more meaningful way. But they want to do it without having to get in a car and drive to the newsagents,” Gaskin told StartupSmart.

That’s what Gaskin and his co-founder Tom Clift sought to change when launching design startup Cardly at the end of 2015. The business provides a way for consumers to purchase and write in digital greeting cards, which are then printed out and sent to the recipients in a process handled entirely by the startup.

Compared to this time last year, Gaskin says Cardly has grown more than 10 times in terms of volume and sales, which are on track to be in the hundreds of thousands this year.

The co-founder’s origins are rooted in the newsagency sector, with his father creating the SupaNews newsagent chain, which stretched to 50 stores across Australia and revenue in excess of $140 million in its heyday. But despite the obvious link to greeting cards, Gaskin says his experience in previous roles with Samsung and his own digital agency all contributed to the birth of Cardly.

“Cardly is my first ‘true’ startup, as I was running my own digital consultancy business beforehand,” he says.

“My experience in newsagents from a young age led me to understand the finer side of the greeting card industry, like issues with artist compensation and environmental impact. That’s really why something like Cardly made so much sense to me.”

“But my experience in e-commerce and business development for Samsung taught me a lot about digital business and scalability.”

Investment the ultimate form of validation

Cardly has just locked down a $230,000 capital raise, led by Queensland University of Technology’s Creative Enterprise Australia accelerator and contributed to by a number of angel investors, including Alan Jones.

Gaskin says the raise took a bit longer to complete than the founders would have liked, and although it started out with a lot of momentum, he admits it got a “bit bogged down” at times.

Despite that, he and Clift are excited to have a number of committed investors on board, which they view as the ultimate form of validation.

“When you’re going through the journey of creating something from scratch, any validation you get is great. But there’s no greater validation than someone saying ‘we share in your vision, and here’s some money’ — not just platitudes,” he says.

“It has been hugely invigorating for the business.”

It’s not the first time Cardly has been offered that sort of cash: Gaskin and Clift did accept a $250,000 deal from Shark Tank investor Naomi Simson last year, however, the funding didn’t end up going ahead.

International from day one

Despite being a hundreds of years old industry, the greeting card industry in Australia is only worth around $1 billion, according to Gaskin. This lead the startup to branch out globally from day one.

“Building relationships across multiple different countries is not something startups have to usually do straight away, but it seems easy to us. The combined greeting card market in the US, UK, and Australia is $17 billion, so we always thought internationally from the get-go,” he says.

It helps to have a “hugely scalable” platform like Cardly, which handles the design choice and card creation on its own website, but lets its contractors handle the printing and sending of the cards. This means they do “all the heavy lifting” says Gaskin, and lets Cardly throw as much or as little volume at them as they want. 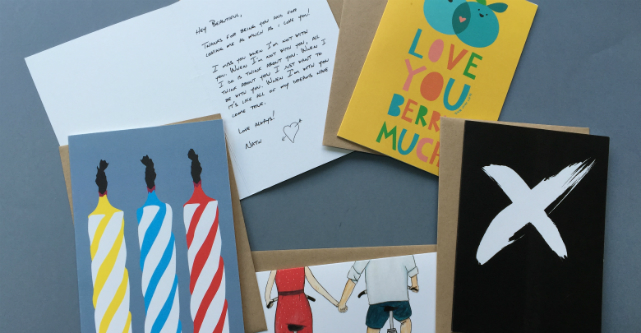 Gaskin says the startup has been likened to fellow design startup Canva a number of times but says the two are only “somewhat related”, with Cardly putting more focus on letting consumers express their sentiments.

But he does see Canva’s recent unicorn status as a vote of confidence for Australian design startups, saying it “certainly doesn’t hurt” to see Canva do well.

Cardly’s traction to date can in part be attributed to the more than 50 independent artists the startup has designing its products. More consumers seeking out beautiful designs as services like Instagram leads to general shoppers becoming more design literate, says Gaskin.

Cardly also allows those independent artists reach a wider audience, and the founders say they’re keen on giving a “leg-up” to emerging artists.

As Cardly prepares for the next stage of growth, Gaskin says the recent capital raise highlighted the importance of being “persistent and tenacious” at all times, even when things look down and you feel disheartened.

“We always looked at the positives, like how excited artists would be to get on our platform. There was always something positive happenings that gave us a reason to keep pushing forward,” he says.

And as for what’s next for the startup, further customisation of the writing services for its cards is at the top of the list. The goal is to make the digitally produced writing look more like natural human writing. This even involves a potential way for users to type in their own handwriting, an idea Gaskin says involves “a bit of development”.

I buy greeting cards in bulk and always have a few stamps in my wallet so I am prepared when needing to send out a handwritten card – simple really!
If you are not organised enough to do this, surely a stroll to the shops to buy a card isn’t really that hard – is it?

Send Out Cards has been doing this before it was fashionable. Unless they can provide a better pricing for delivery? I’m not sure if the wheel really needed to be reinvented. Good luck to them anyway. Perhaps some competition is needed.

If you want to see a different take on providing an immediate solution to sending a card conveniently check out another Australian innovation the T.O.Y Thinking Of You cards app. It allows someone to configure their own card on a mobile and deliver via SMS, email etc. Very convenient. Not physical but does mean a desire to communicate an emotion can be done anytime.