The rise of automation, developments in artificial intelligence, and entire industries being disrupted: the future of work may seem uncertain for some, but two members of the Australian startup community are developing new ways to equip the next generation with the entrepreneurial skills they need to create their own futures.

Billed as a “business school for kids”, Lemonade Stand teaches children between the ages of nine and 12 entrepreneurial skills — skills that co-founder Steve Glaveski says children are currently not being taught in schools.

“The world is moving faster than ever but kids aren’t really prepared for those changes by traditional education channels,” Glaveski tells StartupSmart.

“Depending on which report you read, 40-60% of jobs will be automated in the future, including a lot of white collar jobs. Legal jobs, accounting jobs are being automated, yet kids are still being prepped for these roles in school.”

Launched in Australia in early 2016, the educational programs have already reached 1000 students across the country and in Singapore, where Lemonade Stand opened an office earlier this year to begin building a presence in the South East Asian region.

“Entrepreneurship at a child level can be a great equaliser,” Glaveski says.

“I was in Ho Chi Minh [City] recently, and saw  kids on the street at one in the morning selling gum. Entrepreneurship can be so empowering for kids to create their own freedom and income online -that can be a game changer and create a lot of impact over there.”

Lemonade Stand has now set itself the “big hairy audacious goal” of increasing the number of students it reaches to 100,000 with its online offerings, according to Glaveski.

The startup runs school holiday workshops for 10-20 participants and its online platform will follow a similar formula. Users will have access to an interactive curriculum to learn business fundamentals, marketing, prototyping, how to build a website, and how to pitch.

The online platform is now available for a free trial in beta mode, and will be launching in its completed form “before the end of the year”, Glaveski says.

So far the school holiday program has seen success in instilling an entrepreneurial spirit in its young participants; one of its 11-year old alumni has gone on to found a successful water sports e-commerce site, and is turning over “more than $1000 per month just by leveraging some of the tools we gave him [in the program],” Glaveski says.

“Lemonade Stand is about learning to be more adaptable and leveraging learning tech to better prepare kids for the future. By showing kids what’s possible at young age it inspires them to follow that path.”

“I was on the verge of being expelled” 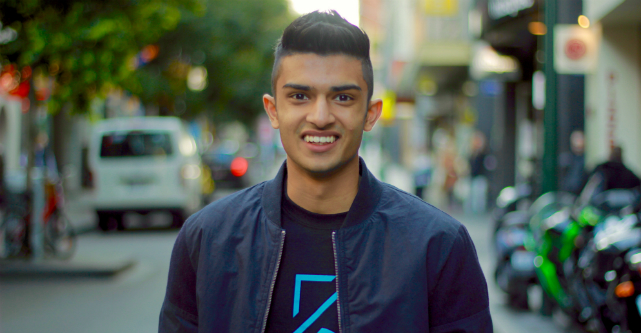 Business Camp offers children and teenagers between the ages of seven and 14 the opportunity to spend three days completing ideation, validation and team-building activities to instil them with a passion for entrepreneurship.

The initiative is run by Fiftysix Creations, a three-year-old venture that Pabari founded when he was 14, and which makes do-it-yourself tablets and coding kits for children across Australia, as well as in North America, Kenya, South Africa and the United Kingdom.

It was Pabari’s experience as a young entrepreneur that taught him the importance of learning startup skills at a young age.

“I am 17 right now — I started Fiftysix when I was 14, and I was the typically disengaged kid at back of classroom,” Pabari tells StartupSmart.

“I was on the verge of being expelled; I was sitting in a primary school classroom with no direction, no end goal.”

Engaging in entrepreneurial ventures inspired Pabari to look to the future and find direction, and he believes “challenging them [students] at a very young age” is crucial to building a generation of forward-thinking, innovative workers.

Pabari adds that while every child may not want to start their own business, entrepreneurship teaches you skills that are “trans-disciplinary” and “can be replicated in any industry and format”.

And while recent moves to teach young students computer literacy and coding from a young age has shown educators are looking to equip children with future skills, Pabari says this coding-based focus needs to be broadened.

“There’s a huge emphasis on teaching kids coding — while its a good skill today it’s not a great skill tomorrow,” Pabari says.

“We’re teaching prep students that will be graduating in 2029 about computer programming. We don’t know what the future looks like, but we know coding is not going to be a skill in 2029.”

Pabari says Business Camp’s program, which will kick off in Brisbane on September 18, aims to “look at skills computers can’t do” like public speaking, networking, and negotiation, which will be “the skills that young people will need in the innovation economy of the future”.