“I’m about to throw my phone at the TV”: Atlassian founder pans the Q&A innovation special 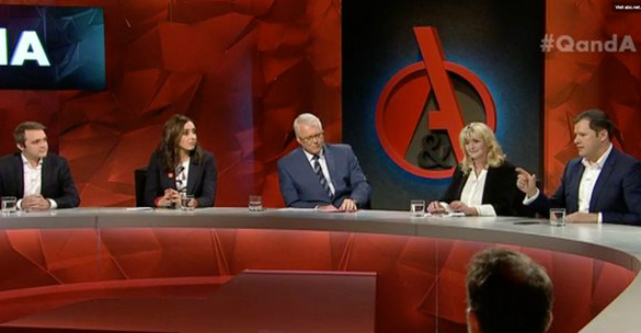 This week’s Q&A saw both major parties’ startup representatives and a panel of experts come together to discuss all things innovation, from the fabled brain drain to the NBN.

But the episode was panned by one of Australia’s most successful entrepreneurs; with Atlassian co-founder Mike Cannon-Brookes pointing out its lack of focus on growing the next generation of founders.

While much of the discussion on the night centred on funding and tax incentives for startups, the pipeline of entrepreneurs and getting the next generation interested in STEM was barely broached.

“About to throw my phone at the TV,” Cannon-Brookes tweeted.

“Can someone please say ‘school’ or ‘education’?!”

Cannon-Brookes went on to voice many other issues he had with the program and its choice of topics.

Startups, capital, incubators… too many mentions. Education? Schools? Near none. Got it backwards. Educated populations innovate. #qanda

Dropping taxes on startups? WTF? "I was going to start a great company but taxes stopped me." Said no one ever. #qanda

Here are five other things that we learnt from the Q&A innovation special.

The first question of the night came from the Start Society and Cooper & Co founder Pete Cooper, who asked assistant minister for innovation Wyatt Roy if the $1 billion in funding over four years included in the innovation statement is enough.

“The rest of the world is literally sprinting past us,” Cooper said.

“One billion dollars – while we’re doing that over four years San Francisco has created $500 billion in tech startups. Why are we doing slow lane innovation strategies?”

“Uber’s doing four times what you put over four years in four months. The money doesn’t match the words, mate.”

While Roy pointed to the need to create a “uniquely Australian ecosystem”, opposition spokesperson for innovation Ed Husic said he welcome the aggressive style adopted by the questioner.

“That type of pointed questioning is necessary,” Husic said.

“I don’t think we’ll ever be able to match the amount of money and that huge volume in the bigger markets, but we can’t just sit on our hands and think it’s too hard for us.”

The focus can’t just be on Sydney

Panellist and Emergent Solutions CEO Holly Ransom described her experiences visiting some of the areas in the US not traditionally associated with innovation and startups, and said Australia needs to do more to ensure the ‘ideas boom’ reaches more regional areas.

“Most of our benchmarking is based on Sydney – two thirds of our entrepreneurship originates out of one city right now,” Ransom said.

“It’s important we grow our other capital cities and we think about how we grow our regions as economic and entrepreneurial hubs too.

“We need to move the focus away from just the capital cities.”

Roy thinks we can have hard and soft-shelled tacos

When questioned over the government’s funding of university-backed incubators and accelerators instead of private companies, Roy used the analogy of the renowned taco ad to demonstrate his point.

“Just because we’re making strong investments into greater industry collaboration around universities and getting that research out into the real world to create these new businesses, products and services doesn’t mean that detracts from what’s happening with startups,” Roy said.

“I get very frustrated in this debate when people say it’s one versus the other.

Both politicians on the panel agreed that the much-talked about brain drain of Australian entrepreneurs leaving the country can be viewed as a positive.

“The idea that we have a brain drain is a debate we have to break out of,” Roy said.

“It’s a very good thing if we have circulation through global innovation hubs. If Aussies are going to Silicon Valley where they’re called the ‘Aussie mafia’ because they’re taking over the place, then that’s a good thing.

“It is incredibly good.”

The current state of the NBN is a “tragedy”

The line that drew the most applause on the night came from Husic discussing the current state of the government’s national broadband network.

“We’re going to have an ideas boom once we get through the buffering,” Husic said to much applause and laughter.

Roy was left as the only panellist supporting the government’s approach to the NBN, with Innovation Clearinghouse founder Sandy Plunkett labelling it a “tragedy”.

Husic said the NBN is crucial to the future of Australia’s startup and innovation sectors.

“If we talk about innovation being a national effort then we can’t get everyone involved if our broadband speeds and availability is at what it’s at now,” Husic said.

“We need to see change.”