Instant commerce startup Milkrun has come up with a creative approach to dealing with trolls on social media — a problem familiar to every company, from large corporations to small independent businesses.

Dealing with unhappy customers — or deliberately incendiary trolls — can be a catch-22 for businesses.

Eight ways to build the ultimate social media strategy in 2022

While it’s important brands address legitimate complaints, not every commenter is posting in good faith, leaving companies at a loose end when weighing up whether to respond to each and every angry post, or rise above the negativity by ignoring it completely.

Milkrun, which most recently raised a massive $75 million to expand its 10-minute delivery service across Australia, has decided to face social media trolls head-on.

Last week, the startup began replying to negative comments with a specially designed discount code that essentially kills the negative poster with kindness.

“We love your passion and wanted to say thank you for your loyalty as a MILKRUN troll,” the company posted, employing the sassy tone of voice it uses across its social media channels.

“Use the code LOYALTROLL on your next order for 20% off.” 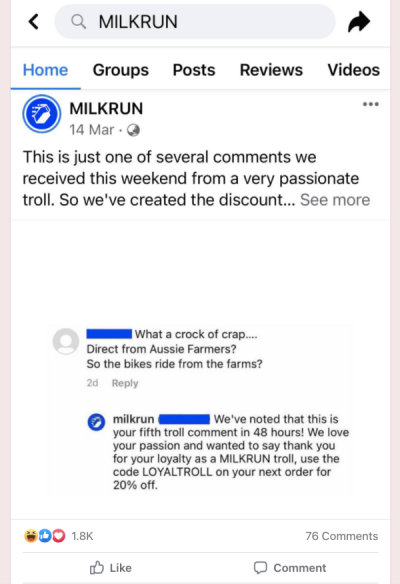 Another example shows the startup responding to a post complaining about the company’s name with a tongue-in-cheek reply that it will change the name to ‘ALMONDMILKRUN’.

Managing the good and bad of social media communities is a fact of life for businesses. And it can be even harder for smaller and independent businesses, which lack the corporate millions to pay a team of social media managers.

Milkrun’s approach spotlights one creative way companies can maintain their brand identity, even while dealing with some of the worst aspects of social media.

On a Facebook page for women-run businesses, a discussion about the startup’s tactics showed many small businesses agreed with standing up to trolls online.

“I think it’s an excellent way of saying ‘leave my brand alone’,” one comment read.

“If you’ve trolled for the 5th time, you deserved to be called out and it was done perfectly in my book.”

Launched late last year, Milkrun is one of several instant grocery delivery startups competing for market share in Australia, alongside the likes of Voly and Send.

The service, promising delivery of online grocery orders within 10 minutes, is currently available in around 40 Sydney suburbs.

In December last year, Voly raised $18 million for its own platform delivering groceries within 15 minutes, and in August 2021 Send raised $3 million for a similar service.

Founder Dany Milham told SmartCompany in January that grocery is “the last frontier” of category disruption — a sector that hasn’t been shaken up in a very, very long time.

People have grown accustomed to ordering takeaway for dinner and having it delivered within 30 minutes, he noted. It stands to reason they should be able to order the ingredients and get them delivered just as quickly.

“I think it was a matter of time.”

Any post offering RATs in a time of great scarcity should be worded very carefully, as in the current climate it is such a sensitive and anxiety-inducing topic.

Why trolling can’t be ignored, and how SMEs can manage it

Trolling on brand-owned digital channels poses significant risk. If not managed effectively, it could have a serious impact on brand reputation and customer experience.