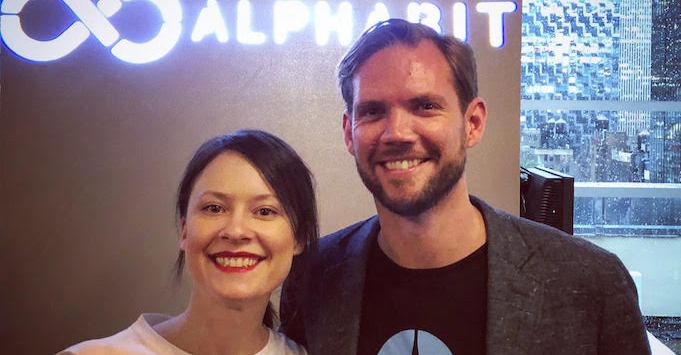 “Blockchain is not this magical thing, like, you sprinkle blockchain dust over your problems and it magically fixes them,” said Jimmy Song, the Bitcoin maximalist who believes the cryptocurrency bitcoin is the real innovation, not its underlying technology, blockchain.

He riled up the crowd, claiming that there were more ‘buzzwords’ in blockchain right now, than really great non-monetary use cases for the emerging tech. He said that within five years, blockchain would be dead.

Jimmy’s scepticism offered a jarring, albeit refreshing, perspective to kick off the world’s largest blockchain conference, Consensus, hosted annually in New York City by CoinDesk. But then, Joe Lubin, founder of Ethereum-driven startup studio ConsenSys, who was softly spoken in contrast to Jimmy’s mild tanty, said, “I’ll bet you any amount of bitcoin that you’re wrong”. They shook hands on stage and the audience whooped like kids in the schoolyard.

This is the madness and magic of Blockchain Week.

It’s a place where self-made billionaires hang out in dive bars and allow no-name entrepreneurs (like me) to buy them a beer. Where some of the most inspiring keynote speakers on the lineup can’t attend the night parties because they haven’t turned 21 yet. Where the majority of hotels have a Lambo or two parked out the front.

During the day, it’s a cacophony of conferences and meetup events, and in the evening, the schedule is laden with lavish parties, after parties, and after after parties. One party had Snoop Dogg headlining, another gave away a couple of Aston Martins as lucky door prizes. Trying to do all of Blockchain Week would be like attempting to eat an entire New York pizza in one mouthful — but people still try. And in the harsh light of day, you can see coffee being guzzled like the elixir of life, as entrepreneurs and investors drag themselves between business meetings and partnership discussions.

I got annoyed with some of the more ostentatious displays of new crypto wealth throughout the week, because I believe it’s a poor representation of what our industry really stands for.

When you get to know the people who are truly driving the future of blockchain tech, you’ll find that none of them are buying into the price hype; they’d still be leading the charge if the price of Ethereum was $20 or $20,000. Instead, they’re talking about using the power of decentralisation to build a new economic paradigm. At Ethereal Summit, Vansa Chatikavanij, managing director of OmiseGo, talked about the 1.7 billion adults currently underserved by the existing financial system, and how her company would bank the unbanked by providing a mobile payments platform that operates across borders and works with crypto, Visa and MasterCard. Projects like OmiseGo are using crypto to empower the most vulnerable and marginalised people in the world, which, in my opinion, is more important than collecting Lambos.

Another social topic that was top of mind throughout the week was gender parity, particularly notable with the amount of ’SATOSHI IS FEMALE’ tees getting around — not just on girls but guys too!

I enjoyed a women-supporting-women moment myself when Thessy Mehrain, who is head of global product and innovation at ConsenSys and founder of Women in Blockchain, reached out to me (seemingly out of the blue) to ask if I would speak at her event during Blockchain Week. She’d been following me in one of our Telegram groups, where I’d been discussing the devastating ripple effects of financial exclusion as experienced by people who work in the adult industry.

Thessy’s event was themed ‘The Right to Transact’ and she put me up alongside the formidable Amber Baldet, former head of blockchain at JP Morgan and co-founder of Clovyr, and Linda N. Lee, UX researcher for ZCash, a cryptocurrency designed to facilitate completely encrypted transactions. To be invited to speak alongside women of this calibre was an incredible accolade, especially considering my comparably short tenure as a blockchain professional.

Linda N. Lee of ZCash, Clovyr’s Amber Baldet and me discussing “The Right to Transact”.

At Thessy’s event, I was blown away to see how many Aussies had turned out in support. There was Katrina Donaghy, the co-founder of Civic Ledger and leader of the Brisbane chapter of Women in Blockchain; Andy Lee, who represents the Victorian Government as a Trade and Investment Director in New York; Max Geraldes from ClubX and Sexpo, who are partners to intimate.io; and a slew of other fair dinkum colleagues and friends.

In fact, I was bumping into Aussies every day in NYC, which wasn’t all that surprising as Australia has earned a name for itself on the global stage, with blockchain ventures such as Power Ledger, Horizon State and CanYa commanding attention, along with Havven, which raised $38 million — Australia’s biggest initial coin offering (ICO) to date — to build their stablecoin solution. In a great Aussie partnership, Havven and intimate.io recently announced we’d be working together to manage crypto volatility for people in the adult industry who wish to accept the intimate token as payment.

This was my virgin experience of Blockchain Week, so I don’t have a personal yardstick, but Jez San, founder of FunFair, who’s been coming to Consensus for four years now, told me he could remember when there were only 400 people attending. This year, at least 8,500 people descended upon New York City, a reflection of how quickly this industry is growing. The rapid expansion of projects like NEM is evidence of this. “Last year, we were just one tiny booth, this year we’ve taken out this whole pavilion!” said Alexandra Tinsman, global director of communications for NEM, as she proudly walked me through a showcase of 18 projects that were building their decentralised applications on NEM’s smart contracts platform.

Many people joke that the crypto world is moving so fast, it feels like a whole ‘crypto year’ is equivalent to one week in the ‘real world’. Which makes the mind boggle when you dare to consider how big Blockchain Week will be in 2019. I wonder if it will be anywhere near as big as Jimmy Song’s mounting sense of regret?

Amazing write up of a crazy week