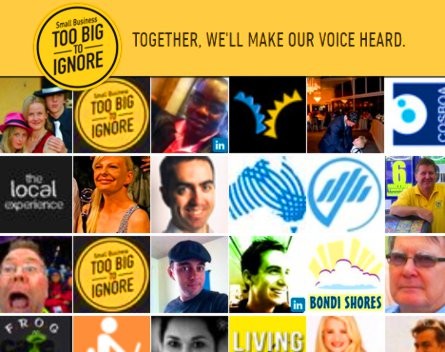 The Australian Chamber of Commerce and Industry today rolled out the next phase of its “Small business too big to ignore” campaign.

“The BIG 4 You Can’t Ignore” was launched by ACCI chief executive Peter Anderson at the National Press Club in Canberra.

The BIG4 campaign calls on the government and Coalition to cut red tape, simplify the tax system, make it easier to employ people and build better infrastructure.

Anderson said government regulation is extremely damaging to small businesses and they were at a tipping point.

“Our tax and finance systems are impossible for the average small business person to understand and comply with,” he said in a statement.

Richard Clancy, executive director of the Victorian Employers Chamber of Commerce and Industry, told SmartCompany the campaign articulates what small businesses are saying and allows others join the conversation.

The online campaign advertisements feature real business owners discussing the hardship and concerns the current system presents small businesses. Many of the people complain about penalty rates and how these high rates stop them from being able to open their businesses at peak periods, such as nights and public holidays.

Anderson said telling the stories of real people, rather than using actors and models, was integral to the campaign and its mission.

“It’s a message not built on actors, not set by scripts, but carved out by the authenticity and rawness of real small business people and their stories,” he said.

The campaign’s latest move is an attempt to garner support and attention for the plight of small businesses from the Coalition and the government in the lead up to September’s election.

Anderson previously told SmartCompany the campaign is giving small businesses the opportunity to have their voices heard in unison.

Anderson says getting noticed before the election is not the sole aim of the campaign.

“I say to the politicians of all political persuasions, something real is happening in the political landscape, starting in our suburb and towns, and it will go beyond 14th September,” he said.

The campaign has already attracted public support with 22,121 people signing a petition.

Small business owners, employers and those who are concerned about the plight of small businesses in Australia can “add their voice” to the campaign online.