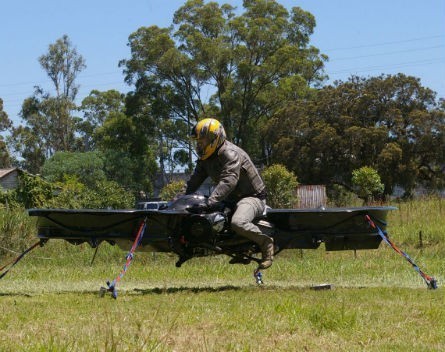 A startup founded in a Sydney garage is expanding into the United States in order to develop hoverbikes for the American military.

The company, which was founded in late 2010, specialises in developing a hoverbike which it describes as the world’s first flying motorcycle.

A lucrative deal with the US Department of Defence could see the hoverbike used by US soldiers, according to Cnet.

This is despite the hoverbike originally being made with cattle mustering and search and rescue operations in mind.

Founder and managing director of Malloy Aeronautics, Chris Malloy, said in a statement the company has decided to set up an office in the US state of Maryland in order to be close to the US Department of Defence.

“Establishing an office in Maryland was a clear business decision,” he said.

“The proximity to the Army Research Laboratory and the US defence decision-makers, access to world-class facilities through the laboratory’s Open Campus initiative, and the co-location with our strategic business partner, Survice Engineering, were all factors in favour of Maryland as the best choice for Malloy Aeronautics.”

Boyd Rutherford, the Lieutenant Governor of Maryland, said in a statement the partnership would see a “new frontier” in aviation.

“I am pleased to join with Survice Engineering and Malloy Aeronautics to announce their partnership on the Hoverbike, which represents a new frontier in aviation,” he said.

“We are also very excited to welcome Malloy and look forward to working with them to grow their operations in Maryland.”

Malloy Aeronautics was contacted for comment but did not respond prior to publication.