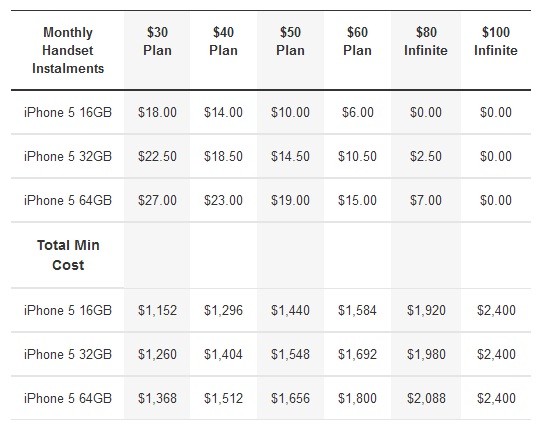 Local telcos have been eager to get their pricing for the iPhone 5 out in the open, with Australia scheduled to see the new gadget launch even hours before the United States on Friday.

The launch window is tighter than usual, so telcos have been ramping up their announcement plans. With three major carriers now offering the phone, pricing is competitive and customers are likely to get a good deal if they shop around.

But if Apple’s own pre-order sales are anything to go by, it’ll be a rush – the company has completely sold out of its pre-order stock. However, all the local telcos are still taking orders.

With just a few days left until the iPhone 5 launches in Australia, here’s a breakdown of every company’s iPhone 5 plans:

In many ways, Vodafone plans are the cheapest of the three major telcos. That could be for two key reasons, both of which customers need to know about: Vodafone won’t be 4G compatible until next year, and it’s currently haemorrhaging subscribers.

The cheaper options could be an attempt to keep subscribers on board for the next two years while it waits to get 4G up and running. In any case, the plans can be a good deal if you don’t mind not having access to a 4G network straight away.

The company also has some 12-month plans available, although these are obviously more expensive.