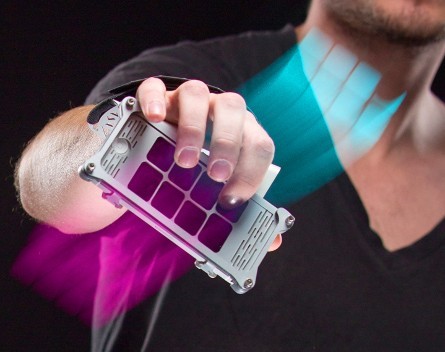 A Melbourne-based startup is one of the stars of Apple’s latest advertisements.

Auug’s Motion Synth is a product that transforms an iPhone into a new kind of musical instrument, blurring the line between physical and virtual instruments.

It’s also able to play external devices like hardware synths or vocal harmonizers as well as control audio or visual software on a laptop.

It was successfully funded on Kickstarter last year and Auug founder Joshua Young says the first wave of products will be sent out to Kickstarter backers at the end of June.

“I’ve been fascinated by this area for quite a long time and I kind of settled on the concept of trying to combine the best of both worlds, having something that is physical and something that is virtual,’’ he says.

“For music, interacting with something physical is the best way to achieve rhythmic precision, and combining this with free-form motion control adds expressive freedom.”

Following the successful Kickstarter campaign, Young says the Auug team underwent a detailed consulting process with their backers to understand exactly what they wanted from Motion Synth.

“We learnt a lot from the people interested in the product about what they wanted it to be,” he says.

“We went into quite a detailed feedback process asking our backers all sorts of things about how they predicted they would use this and what are the features that most appealed to them.

“Our backers on Kickstarter are mostly these very professional musicians and are already very much into the technical side of what they’re doing. They have keen ideas about what they want to do.

“What they’re most excited about is using it for a controller for other devices, first and foremost being laptop software and then being able to control iOS synths on the same device.

“We’re suggesting to artists an additional new way to move and perform, and it is amazing to see that there are pioneering and creative people out there willing to give it a try.”

Young says the device will free up musicians from the need to be tinkering with laptops and keyboards on stage but it also has the potential for other applications too, like controlling virtual reality software or drones.

The company is yet to raise funds outside the Kickstarter campaign and is focusing on manufacturing and finalising the Motion Synth Software.