Best of the Web: Ebola panic grips the US; Marc Andreessen on diversity; and cloned puppies for sale 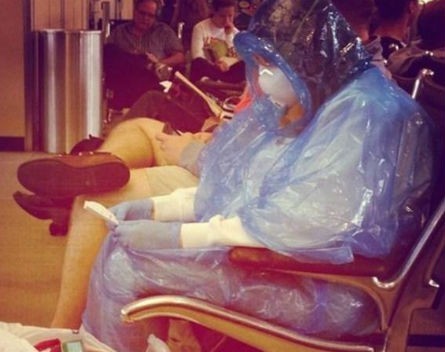 With the fear of Ebola spreading at a much faster rate than the virus, The New Yorker takes time out from the hysteria to trace the origins of this latest outbreak.

We learn that the first patient of this outbreak (now considered an epidemic) was a two-year-old boy, and that “the virus is a parasite that lives, normally, in some as yet unidentified creature in the ecosystems of equatorial Africa”. Outbreaks occur from time to time, but for the most part they are contained.

“The virus is extremely infectious. Experiments suggest that if one particle of Ebola enters a person’s bloodstream it can cause a fatal infection,” according to The New Yorker.

“This may explain why many of the medical workers who came down with Ebola couldn’t remember making any mistakes that might have exposed them. One common route of entry is thought to be the wet membrane on the inner surface of the eyelid, which a person might touch with a contaminated fingertip.”

We learn about how health authorities first became aware of what was happening, and began raising the alarm.

It reads like a John Le Carre novel in its description of what happened, puts faces to the Ebola victims, and relays the challenges for those who tried to contain the initial outbreak.

“Khan arrived driving a battered old car. He was thirty, a modest, handsome man who smiled and joked playfully with people. Khan took up his work and gave patients exceptional attention. One day, a U.S. graduate student named Joseph Fair fell desperately ill with bloody diarrhea. Khan paid a visit to Fair at his room in a nearby Catholic mission, and that was when Fair discovered that Khan had a beautiful bedside manner.”

Marc Andreessen, in a bit more than 140 characters

It begins with the understatement, “It’s not hard to coax an opinion out of Marc Andreessen,” but the New York Magazine’s interview with him actually coaxes out a lot more in this Q&A.

Known for his Twitter tirades, which are rapidly fired successive tweets often talking about the state of startups, the Valley, VCs and founders, Andreessen gives a mite more than 140, though his views are not that unpredictable. Hint, he believes the Valley does not discriminate and that diversity is not a problem.

“To believe in a systematic pattern of discrimination, you’d have to believe that we’re discriminatory toward certain people without being discriminatory at all toward an extremely broad range of ethnicities and religions,” Andreessen says.

“You believe in the meritocratic ideal of Silicon Valley,” the interveiwer asks Andreessen.

“Yes. But I believe the ideal is compromised by two things right now: One is educational skills development, and the other is access. This is the critique that I think is actually the most interesting, which is, yeah, the meritocracy works if you know the right people, if you have access to the networks. How do venture capitalists make investment decisions? Well, we get referrals based on people we already know. Well, what if you’re somebody who doesn’t already know anybody, right? What if you don’t know the recruiter at Facebook so you can’t get the job? What if you don’t know the venture capitalist so you can’t raise funding? We think access is broadening out the network so that everybody who could contribute can get access to the network. And that’s the one that we’re working on.”

Want to clone your dog?

Meet Hwang Woo Suk, the South Korean scientist disgraced 10 years ago for claiming falsely to have cloned a human embryo.

According to Bloomberg, he’s back and this time his dog-cloning is for real.

Since 2005, Suk has been selling his service and and now trades in 150 to 200 duplicated canines a year.

His likely next move will be a lab in China, where trophy dogs sell for fine-art prices — $2.6m for a Tibetan mastiff puppy.

“Behind glass in a never-before-used operating room inside a just-built cabin at the end of a freshly paved road, Dr Hwang Woo Suk is chasing rogue flies with an electrified bug swatter that looks like a small tennis racket,” writes Z Josh Dean.

“He wears baby blue scrubs branded with the logo of Sooam Biotech, his South Korea-based research company, and is making final checks of this temporary facility, erected from scratch in eight days in the Chinese city of Weihai. Here, in a few hours, he’ll deliver the first cloned puppies in the country’s history.